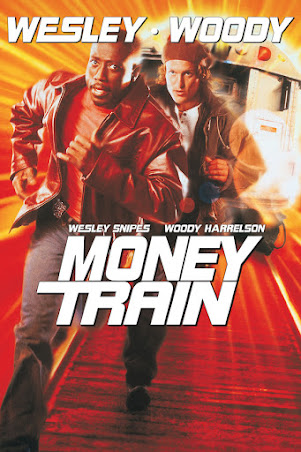 A Blast From Start To Finish And A Far More Badass Action Flick Then It Gets Credit For
by robotGEEK
Well this was one helluva surprise. I hadn't seen this or even thought of it in well over 20 years, and when I recently made a post on Instagram about some other film (I don't remember which one), a good friend of mine suggested I revisit this one, and wouldn't you know, not even a week later it was added to HBO Max's library. How perfect and serendipitous?!

I decided to throw this on on a Saturday night and honestly, it couldn't have been a more perfect Saturday night flick to be honest. One thing that I noticed right off the bat is that this is a much better and stronger film all around than I was expecting. I guess my memory of this was that it was more of a comedy, and while yes, it is quite hilarious, it's actually a pretty kickass straight-up 90's action gem that delivers everything in spades, from the aesthetics, to the insane and highly impressive stunts, to the model miniatures and of course, the action and comedy. I really don't like using the word comedy because I feel it takes away from the overall vibe of the film being a total blast as an action film. And maybe I'm not alone in thinking that? I mean, why doesn't anybody ever talk about this? Maybe people aren't even aware that it's more of a balls-to-the-wall action flick than an action/comedy? If that's the case, you need to fix that pronto because Money Train kicks an insane amount of ass.

Wesley and Woody are such an infectious duo, and their chemistry is undeniable. I thought that White Men Can't Jump was their only other collaboration, but someone pointed out that they've actually been in a few other films together, which I was completely unaware of. I think the 80's football comedy Wildcats is one of them. And here, they play off each other so comfortably well that I'm surprised they didn't co-star in more films together. You've also got a fresh-faced and insanely hot Jennifer Lopez as the new partner/love interest, and one helluva devilish performance from Robert Blake as the asshole boss of the transit authority. He's not really the villain, but damn if he doesn't come across as it. 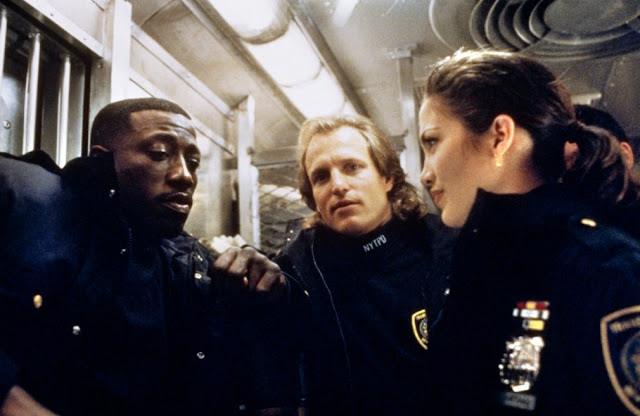 While I was watching this that Saturday night just completely enthralled by it all, I posted a clip of a scene where Snipes kicks the living shit out of 2 guys using his martial arts skills, and that little clip got so much response. For starters, people were tripping that there were even fights like that in the film, and secondly, that they looked so damn brutal. Yes, Money Train is full of kickass hand-to-hand fights, chases, shootouts and there's even a subplot about a serial killer who goes around killing transit booth employees by lighting them on fire. I'm telling you, this film never skipped a beat, and is just a nonstop thrill-ride from start to finish. Another solid point that a few people made based on that clip was remembering how badass Snipes was once upon a time. Obviously it's hard to separate the guy from his personal shit, his reputation of being difficult, his prison stint on tax charges of all things, and his lack of quality roles since the early 2000's, but man. He sure as hell had a great run as an action lead in the 90's. As we speak, I'm currently revisiting the excellent Passenger 57 (his first action hero lead) as well thanks to TubiTV. He was such a badass. I will say though, he was the best thing about the new Coming 2 America if I'm to be completely honest. I know that film has people pretty divided in general (full disclosure: I actually enjoyed it once I stopped trying to compare it to the original. I feel it works better as a drama rather than a comedy), but Snipes sure steals the show in every scene he was in. 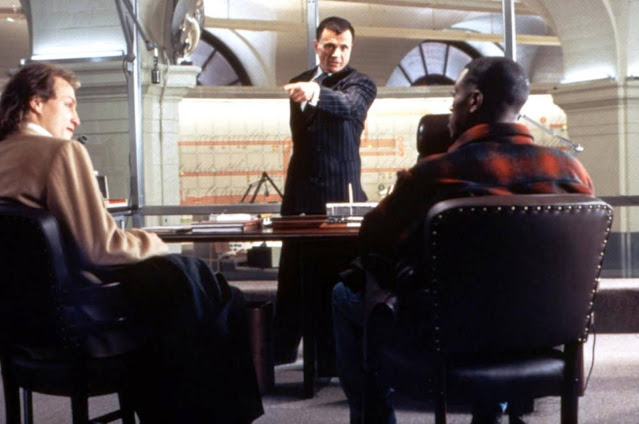 Money Train is an absolute blast from start to finish. Maybe it's the title, or the fact that it reteams Wesley and Woody, who previously starred in a comedy together, or that it was marketed as an action/comedy (which is technically is), but goddamn it's a great action film through and through and it really needs to be recognized as one. I feel it's slipped under the radar for a lot of people, or those who have seen it don't remember it being this badass.... like me! Whatever the case may be, Money Train needs to be revisited with fresh eyes and celebrated for being a pitch perfect Saturday Night action flick. Never a dull moment, and director Joseph Ruben (The Stepfather) handles the visuals, action set pieces and frantic pace like an action pro. I'm SHOCKED he never directed more action films like this, because not only was it a damn good looking action film, full of that amazing 90's aesthetic that makes these films so recognizable, and memorable, but it was also effortlessly hilarious without feeling forced. In short, Money Train rules.

Money Train is currently streaming in HD on HBO Max