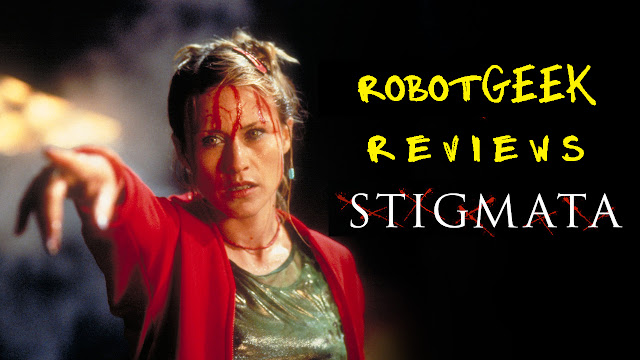 by robotGEEK
Suddenly, I've found myself digging deep into 90's horror a lot lately. I think it's because I was a bit all over the place in the 90's. I was in my 20's, moved to a new (much bigger) city by myself, worked 2 jobs to survive, partied a lot, and really just didn't have the time to even think about movies. I know I missed out on a LOT of films during that decade, and as I finally take the time to watch them for the first time, I'm discovering that I really missed out on some serious gems.
I could be wrong, but I feel like there was a surge in these types of religion/exorcism films during this period. That's probably why I never got around to it either. I must have just felt (at the time), that I'd already seen similar enough films being released that I easily dismissed it. Well, I'm here to tell you that THAT WAS A MISTAKE. Stigmata is awesome on so many levels. Let's dig in. 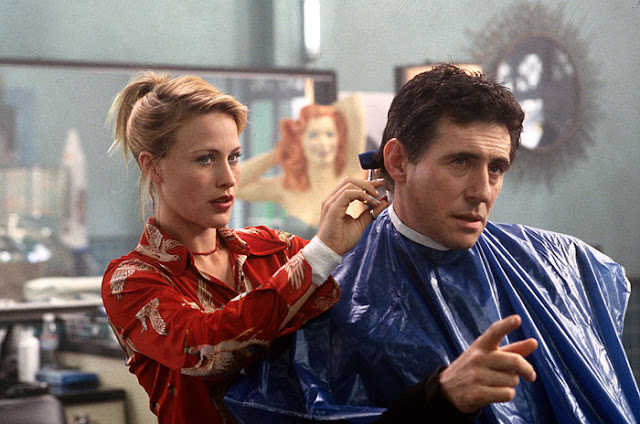 While investigating another case for the church, Father Andrew Kiernan (Gabriel Byrne) is made aware of a separate case involving a woman believed to be afflicted by Stigmata. The church wants him to close the case and move on, even trying to reassign him to other more urgent cases, but as his connection to the young woman (Patricia Arquette) who's suffering from this becomes stronger, he realizes this may be an actual legitimate Stigmata, and one he cannot walk away from.
I gotta tell you. If you want a hard dose of 90's nostalgia, kind of the way Mallrats does, but in a completely different way, then you need to check this gem of a film out. For starters, it's gleefully apparent that it's from a music video/commercial director. You know, the ones that really tend to throw all of their eggs into one basket in the start of their career and just kind of blow you away with aesthetics and visual eye candy? Michael Bay did it with Bad Boys and The Rock, David Fincher did it with Alien3 and Seven, and the list goes on and on. This time around we've got music video director Rupert Wainwright, who surprisingly had already done a few films prior to this, 1 TV Movie and 2 comedies, before diving into horror with this film. And I have to tell you, he directs it like it's his first film, pulling out all the stops and delivering a truly stunningly visual film experience. The fact that it was done in the 90's is just icing on top. 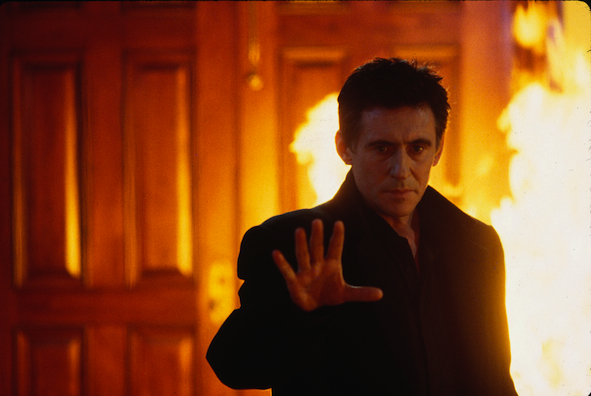 One thing that immediately put a HUGE smile on our faces as we sat down for this was how obnoxiously 90's this all is right at the beginning during the opening credits. I won't spoil it for you, but holy shit, it was the "chef's kiss" of opening credit sequences in a horror film. Then you see that the score is from none other than Billy Corgin of The Smashing Pumpkins, and well, it was all just perfect. The in-your-face music, the quick-cut editing, the 90's font (!!!), and the setting. Perfect, perfect, perfect.
For those of you who are Gabriel Byrne fans, and I'm discovering that there are actually a lot of you, especially the ladies, you'll notice that he looks a helluva lot like his character of the Devil in Arnold Schwarzenegger's End of Days. I love that film too by the way. Peter Hyams is easily my favorite filmmaker and while End of Days doesn't get a whole lot of love, I personally love it. I was surprised to learn that this film and End of Days both came out in the same year! It's like he literally stepped off of one movie set and just walked over to the other in the same exact outfit! In one film he plays the Devil, and in the other he plays a priest! In fact, I've seen several images of him online from this film wrongly attributed to his character in End of Days. Easy to do since he looks exactly the same, yet it's shocking how he can come off as so evil in one film, and so good and likable in the other.

Visually, this is where Stigmata shines. It's just absolutely gorgeous. Rupert Wainwright's camerawork is nothing short of stunning, giving off some serious 90's David Fincher and Peter Hyams vibes. Hell, I'll even say it's more of a combo of peak John Woo and Peter Hyams. You heard me! Each shot is brilliantly and meticulously executed in a way I wasn't expecting. I mean, who would have thought a bellow-the-radar film like this would have looked so damn good? I certainly wasn't. I will tell you which film I was actually expecting this kind of lush and impressive camerawork though...The Prophecy (1995). It did look surprisingly good, I'll give it that. And the Walken and the cast was great, but goddamn was it dull. Stigmata not only offers great eye candy, but it's just so much fun from start to finish. Ridiculous, dated, with some seriously impressive set design, stuntwork and great effects work from the one and only Ve Neill, Stigmata is one helluva great time. We rented the DVD, but this seriously needs to be seen in HD, so we'll promptly be grabbing the Blu Ray soon because this needs to be in the collection permanently. To say this film was a surprise is an understatement.
On a side note, I wanted to let you all know that I'll be starting a YouTube Channel very shortly. It's something so many people have told me to do, but my own insecurities have prevented me from doing. I don't know. This year has been crazy in a good way for me. I feel now would be the time to try it, even if it fails. So stay tuned. I hope to get that up and running within the next few weeks. Thank you for sticking around. 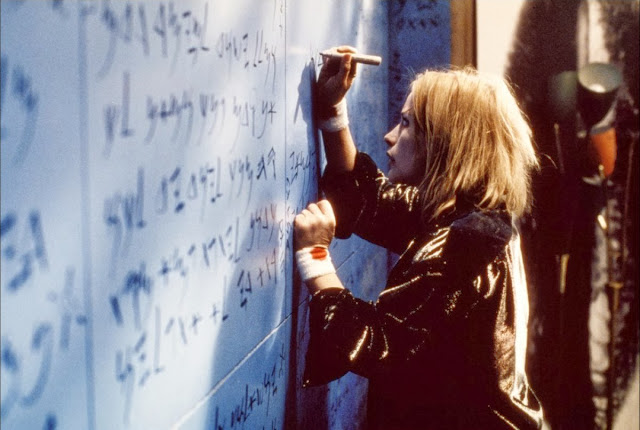 Posted by robotGEEK at 4:32 PM