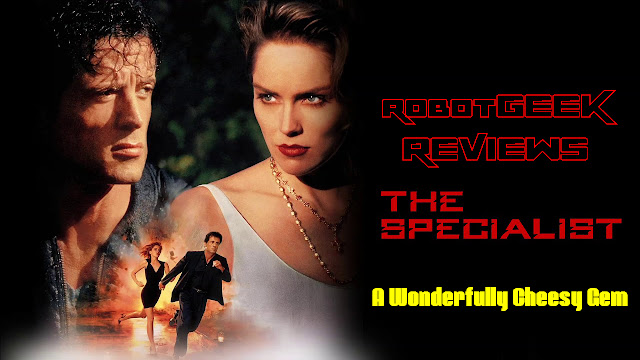 Boy I tell ya, the 90's keep coming back to surprise me over and over again lately, as I'm sure you've noticed! Checking out some gems from the 90's, or rediscovering them all over again after so many years has literally been one of the highlights for me this past year. I never would have thought that that particular decade would ultimately become so fucking instrumental in fleshing out my taste in films the way it has. But here we are once again with a film that blew me away. Get it? Because it's about a bomb expert. *crickets

I also thought maybe there are some of you who aren't much into video reviews, with this film marking my first journey into that new area for me a few posts back. So just in case, I thought I'd write down a few words on how much fun this ridiculous little gem of a film is. 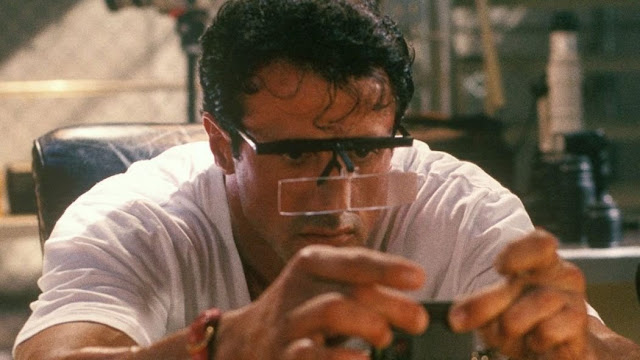 Full disclosure. I remember giving this a shot back then, but I maybe got 15-20 minutes in and gave up. I just wasn't into it at the time. Didn't like it's genre, it's direction and I sure as hell wasn't a fan of James Woods as much as I am today back then. Much like some of you, I don't care too much for him or his politics as a person, but I sure love the shit out of him as an actor. Say what you will about him personally, but the man can deliver a performance unlike most others. And here, he shines in every goddamn second he's on screen, easily outshining every other actor in here.

The Specialist is about a former bomb expert who is an under-the-radar and off-the-grid expert for hire when a mysterious woman (Sharon Stone) convinces him to take on a hit job on the people responsible for her parents murder that she witnessed as as kid. While he still feels uneasy about the deal, he reluctantly accepts and goes about killing those for her parents murder one by one, while also having a steamy affair with her. His former commander (James Woods), now a freelance security expert, is the security pro responsible for his targets protection, which complicates matters.

The Specialist, for all intents and purposes, is a silly, over-the-top, ridiculous and highly absurd mess. It's like a film that Joe Eszterhas would have written right smack in the middle of his early to mid 90's explosion of sleezy cult classics like Basic Instinct and Showgirls. In fact, I'm not entirely convinced he didn't. It's. So. Much. Fun. It's great for all the reasons that make it a mess and I loved every single minute of it. Stone is hot as hell as the mysterious woman at the center of everything, while James Woods is on fire as the hot head security expert who is very clearly on cocaine. Hell, maybe Woods really was on it too because this is probably the most over-the-top I've ever seen him and he's absolutely amazing in this. Eric Roberts does a helluva job as another villain, and Rod Steiger does his best Cuban accent. Stallone is solid in a role I wasn't used to seeing him in. 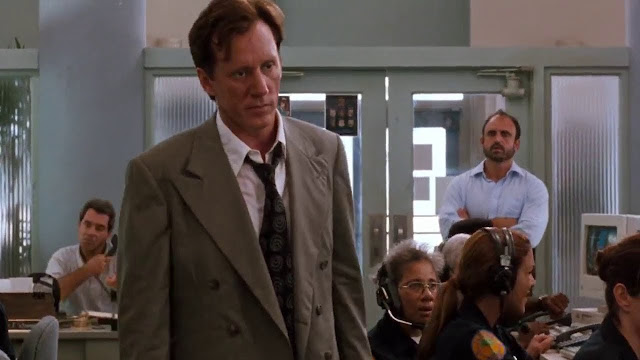 To further the bizarre atmosphere, there's a surreal sequence where Stallone and Stone are both thinking of each other that will leave you dumbfounded. It's bizarre, strange, and feels totally out of place, like it's from an 80's music video, and it's spectacular.

I also got to give it to director Luis Llosa (Sniper, Anaconda) for doing an ace job behind the camera. This is a seriously slick looking film and I was surprised as anybody to discover this. Aside from it being insanely hot with everyone either sweating or glistening, it's a gorgeous looking film with some stellar camerawork and impressive pyrotechnics. The sound design for said pyrotechnics could have been better, but that's just a minor detail.

The Specialist is currently streaming on TubiTV right now for FREE and in HD. Give it a watch. It's a perfect Saturday Night Movie.

Posted by robotGEEK at 7:23 PM