Apologies for the absence and slow streaming of reviews, but as you can see, I've picked up a new hobby. With my work schedule, I'll need to try harder at managing my free time to work on these and my reviews from now on. 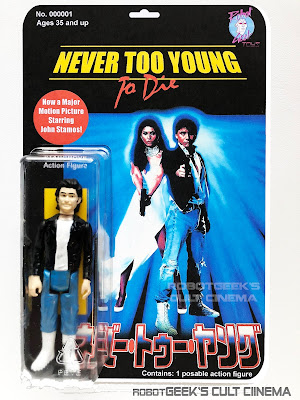 I've been a toy collector all my life, and as I've just turned 42, that's a very long time. While I do tend to take breaks from it here and there, I can't remember the last time I was this into it. Initially starting as a project and journey to re-acquire every toy I had as a kid (mid-life crisis maybe?), It's since become a full-on obsession as I dig into other area's of the toy market, including custom action figures.

What I love about custom action figures is that most of these are toys that have never made it into production, and more than likely never ever will. There are some insanely talented custom action figure artists out there, and others not so much. One of the best guys out there doing this is Dan over at Death By Toys, whom I credit as my inspiration and who I aspire to be as good as some day.

One thing I've learned on this journey is that each one of these takes a lot of work and a lot of money, hence the high price tags for these when and if they're ever for sale, which most of the time they're not. They're more personal projects than anything. Personally speaking I couldn't imagine selling these because they take so much time, money and effort for each one, which I barely have enough of with my current schedule. So as far as I'm concerned, whichever ones I continue to make, will always just be a one-off and that's it. Plus, I just don't think they're good enough to actually sell. As much as I like what I've done so far, all I see are the flaws.

When I decided to start playing around with making custom action figures, my list of possible figures was insanely long. But I had to start with something easy, or less involved I should say. And one of the first ones I chose was the character of Stargrove, from one of my all-time favorite films, the 1986 cult classic Never Too Young To Die, a true batshit crazy experience that blows my mind every time I watch it.

How To Do It:
This one took cutting off various body parts of 2 different ReAction action figures (you have to find the exact parts you need because chances are any 1 single figure won't be good enough), painting and gluing back together to form the one I wanted to make. Then came the cardback design and printing, which cost me a pretty penny in various types of paper and supplies until I found the one that worked best with my printer. Even though you can watch any number of tutorials online on how to make these, I found that every single one of them failed to mention that very important detail, because it does make a huge difference. It really all depends on what printer you are using, what the settings on that printer will be for the specific paper you decided on and finding the right type of thick paper that works best with your printer.

Please comment if  you have any questions or like what I've done so far. I' have another one I'll be posting in the next few days. Until next time!