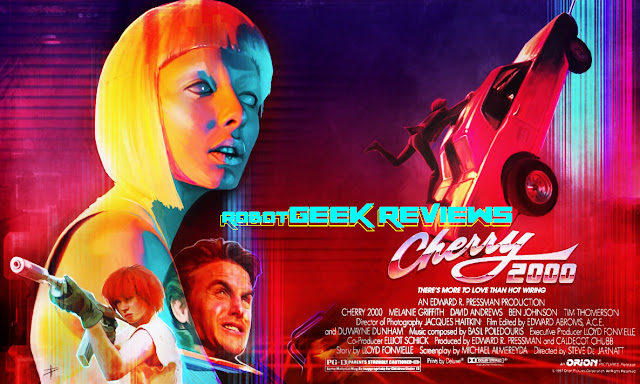 A title and poster that has been perpetually burned into my brain for 31 years, Cherry 2000 has been a film that has always sort of been in the back of my mind throughout the years because there are so many things about it that just scream my name. Yet, I never actually took the time to watch it but just one time many, many years ago in the late 80's, and I honestly don't remember anything about it.

Flash forward a few decades and I discovered a little-seen gem called Miracle Mile, written and directed by Steven De Jarnatt. De Jarnatt also happened to direct Cherry 2000 just a years earlier. I loved Miracle Mile so much that it immediately became a personal favorite and I figured if he could do something that special, then maybe there was really something to Cherry 2000? Let's dig in. 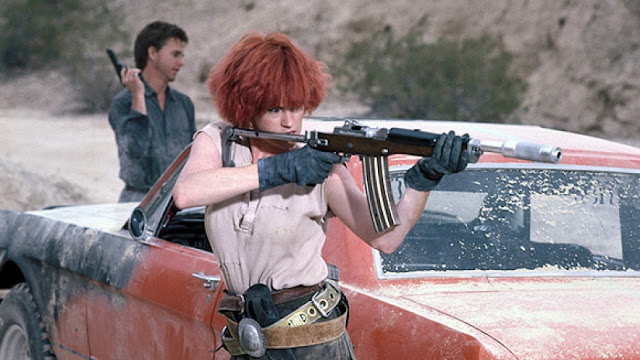 One of the first things immediately apparent is that this was a great looking film visually. Not once does it ever look cheap or low-budget, especially in the direction. Thanks to director Steven De Jarnett, Cherry 2000 packs a visual punch and it's a good thing, because unfortunately it lacks in several other departments, starting with it's tone. As great as the film looks, it's sadly hampered by an uneven tone, not really knowing what type of film it wants to be. At times too quirky and goofy to be a straight-up post apocalyptic film (which it very much wants to be), and at others too serious to be taken as anything but an 80's action/adventure tale. The constant back and forth between the two is jarring and the result is a film that tries too hard to be funny and quirky, but then falls flat and you end up being bored. Melanie Griffith's annoying voice is another turnoff for me here, and while I can appreciate her devotion, it's hard to take her serious.

On the positive side though, the supporting cast is pretty fantastic with killer performances from the late great Brion James, Tim Thomerson hamming it up as the main villain, and a severely underused Robert Z'Dar a full year before he became immortalized as Maniac Cop. 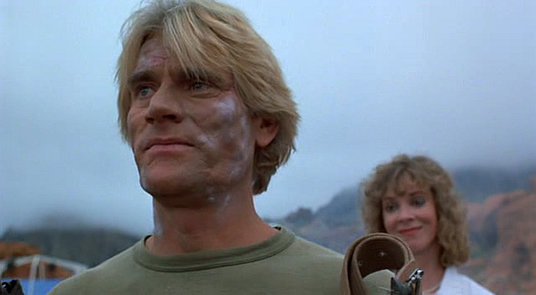 One could say that director Steve De Jarnatt was finding his groove here because this was his first gig directing a feature length film, having only directed a short and an episode of Alfred Hitchcock Presents previously. You see the raw talent, and combined with it's impressive production design, Cherry 2000 looks better than you'd expect. But the same could be said for the films screenwriter, Michael Almereyda, who's no stranger to quirky films as he's made a career out of writing and directing them. But again, this was his first credited screenplay for a full length feature and combined with De Jarnatt's inexperience, maybe it was too powerful a force to fix, even in editing, which also could have saved this experience.

To his credit, Steve De Jarnatt completely redeemed himself the following year with Miracle Mile, a brilliantly quirky and beautiful end of the world disaster film that flew so far under the radar that nobody saw it, yet has held a nice cult following ever since. I implore you, if you haven't seen it yet, you need to fix that pronto. It's fantastic and quite the pleasant surprise. Sadly, De Jarnatt would mark Miracle Mile as his crowing achievement because he's stuck strictly to television ever since, making Cherry 2000 and Miracle Mile his only feature films. 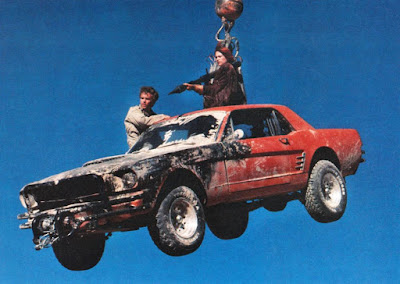 It's not a terrible film, but it's not a very good or entertaining one either. It very well could be, had the right powers that be guided this thing a little more coherently. As it stands, it's a bit of an uneven mess that boasts a killer cast and looks pretty great. I'm just glad I didn't shell out the big bucks for the new Blu Ray.

How to see it:
Available for cheap on every single format, it got a spiffy Blu Ray release in 2015 courtesy of Kino Lorber with a slick impressive new transfer, a commentary by director Steve De Jarnatt and a short "Making of" documentary. You can snag it for under $20, or you can rent it in HD via Amazon Instant Video.