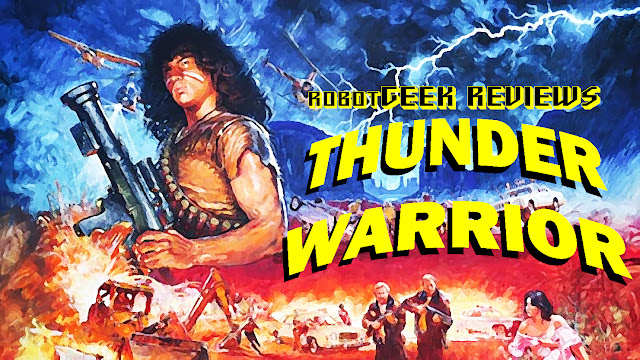 A First Blood ripoff that fails to pack a punch

Released in the crux of the 80's Italian Trash explosion, Thunder Warrior aka Thunder is a First Blood ripoff that twists the tale a bit by making the lead a Native American named Thunder, who's coming home from the war to find that a sacred cemetery is going to be moved by greedy land developers. When he tries to involve the authorities, he quickly learns the racist local sheriffs department are of no help and decides to take matters into his own hands. 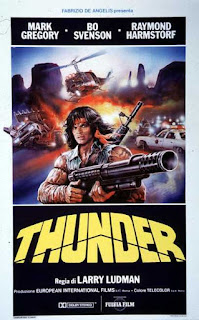 Starring Mark Gregory, fresh off his stint  in 2 other notable Italian Trash classics, 1990: The Bronx Warrriors and Escape From the Bronx, Thunder Warrior comes just a year after it's inspiration, First Blood, hit theaters and turned Stallone into a mega-star. While Thunder Warrior wouldn't do the same for Gregory, save for the Thunder Warrior sequels, it's retained quite the status as a true cult classic, primarily within the Italian Trash genre. It was so popular in fact that it ultimately spawned 2 sequels, each about a racist sheriff that Thunder must go up against and each starring Mark Gregory and directed by Fabrizio De Angelis. Mark Gregory would retire from acting altogether in 1989 with only 11 film credits to his name and hasn't been seen or heard from since. But that's another story.

Thunder Warrior was pretty solid overall. I think the one thing I was hoping for was that it would maybe be on the "So bad it's good" side, with possibly a few WTF?! moments thrown in, which is what made these Italian Trash flicks so damn good to begin with. Unfortunately neither of those things are found in here, making Thunder Warrior a pretty straightforward First Blood ripoff without any of the unintentionally endearing elements found so common in this genre. 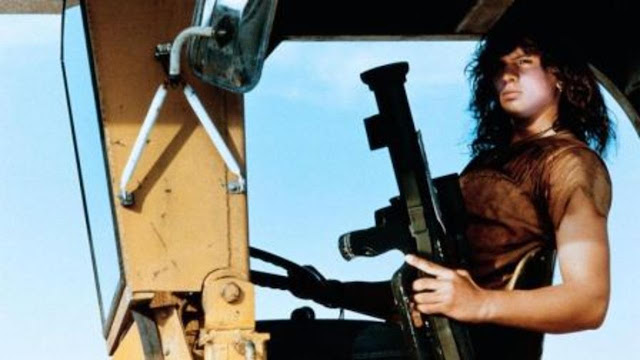 Mark Gregory, to his credit, does a splendid job in the role of Thunder, a man pushed to the edge by the local authorities who throw bigotry in his face at every turn, who feels he has no choice but to not only defend himself, but the sacred cemetery that they're hellbent on destroying. Despite a man of few words, his physical presence alone does the job.

I think one of the things that most people will remember about this film is not that it's awesome, or has some amazing stunts and action, but it's often harsh depiction of racism. Extremely un-PC by today's standards, the insane amount of racist language and hate spewed out of nearly every character in here makes the experience awfully uncomfortable for anyone who's ever had to deal with that in their life. Of course this was during a time when things were a little different, and I'm fairly certain the language and derogatory terms in here wouldn't be used had this film been made today.

I think the film could have been better. It works well enough for what it is, but you keep waiting for that one kickass moment that never comes. Director Fabrizio De Angelis, here marking his directorial debut, isn't the most competent or stylish director either, giving the film an almost amateurish rushed look and feeling for the most part. At least we're treated to a finale that satisfies in the action department, it's just a shame that most of the film feels a bit tedious.

Years later Mark Gregory and director Fabrizio De Angelis would re-team for the sequels Thunder II (1987) and Thunder III (1988). Part of me wants to check these out because I'm curious where they take the story, and if De Angelis ever got better as a director. I'm in no rush though, so only time will tell. Until next time.

Posted by robotGEEK at 1:38 PM