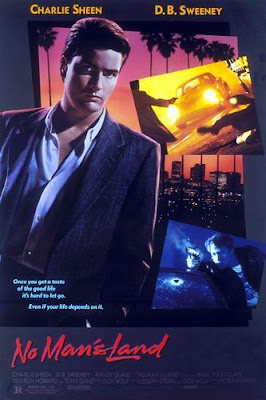 Here's another one of those films I'd seen countless times in the video store, yet never really appealed to me for one reason or another. But as I dig into 80's stuff, this film, and the cover in particular, really drew me in. Finding it on VHS wasn't as cheap as I expected though. While it has indeed gotten a DVD release, it's not in widescreen, so I figured why bother with that format and go with the one I really enjoy. I found it difficult to track down for under $10. If I'm going to pay that much for a tape, I'd want it to be in great condition, which most were unfortunately not.

It's like an 80's time capsule. The clothes, the stores, the cars, the buildings, it's pretty slick in a Miami Vice sort of way and gives the film a little kick of amusement that had it been missing, would have made the film pretty forgettable. I've heard a lot of people refer to this as the first Fast and the Furious film because it's kinda sorta the same kind of story, only with Porsche's, and more specifically, Porsche's of the 80's. While the film itself isn't really all that engaging, playing out like a typical undercover detective story, just the fact that it's 1987 offers up some real nice visual eye candy. Television director Peter Werner does a decent job capturing it all with a steady even hand. Nothing flashy, but it's not lazy either, which was a relief. He does a pretty straightforward job, which is actually a pretty good fit for the material.

Solid casting. In terms of story, a rookie cop (D.B. Sweeney) goes undercover to infiltrate a stolen car ring, befriending the head of that ring (Charlie Sheen), and getting sucked deep into the lifestyle, forming a tight bond with his target, but complicating matters by falling in love with his target's sister. It's pretty standard stuff, and though there are some great performances by a surprisingly solid cast that also includes Randy Quaid (playing an asshole cop, similar to his character in The Wraith, also with Sheen), Bill Duke and M. Emmett Walsh.

Sheen is the standout though. He's the guy that Sweeney's character is supposed to be investigating, yet falls for his charm and charisma, making it difficult to believe he's responsible for murder, like his boss keeps telling him. Charlie Sheen was having an incredibly busy year, starring in a total of 4 films  - Wisdom, Three for the Road, No Mans Land, and Wall Street. And this is of course coming off of his star making turn in Oliver Stone's Platoon just the year before. Seeing him in films like this reminds me of that special something he once had. It's easy to see why and how he became such a big star.

Don't expect a lot of car chases. For a film that so many others refer to as the first Fast and the Furious film, I was surprised to find only 1 single car chase in here. Sure there's a lot of driving and lots of flashy Porsche's, but sadly the film can only boast a single car chase to it's credit.

Less talking, more car chases. While the film was made and structured well, rounded out by a solid cast, it still doesn't really engage you very well. In fact, I couldn't help but shake that this easily could have been used for an episode of Miami Vice or a similar show.

All in all, a decent crime drama/thriller, offering little in the way of actual thrills, instead deciding to focus more as character study than a film full of car chases, crashes and stunts.
Posted by robotGEEK at 10:17 AM