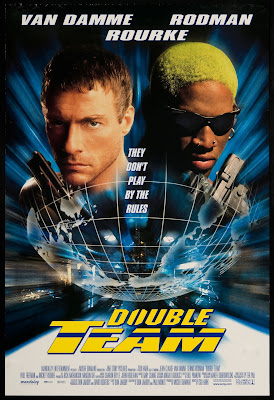 Two words. Mind. Blown. Somehow, in some way, Jean-Claude Van Damme managed to make a shockingly entertaining film right smack in the middle of his downward spiral in his personal life and film output. We all know about his personal stuff; drug addiction, marital problems, and it was reflected in his film-work. Try not to watch Maximum Risk and Knock Off and not tell me he's tired, a little out of it, and not in a good place. Yet here, though he still doesn't resemble the same man from earlier films like Double Impact, he offers some of his best work on a physical level. I've never seen him kick ass more than he did here.

No more slow-motion. Jean-Claude has never looked better when it comes to his onscreen martial arts. Ever since the very beginning, one of the signatures of a Van Damme flick is the slow-mo fights. And I'm talking slow-mo "eeeeverything". Punches, kicks, jumps, head-buts, flips, you name it. Well, if you want to get technical, I guess you can't say that about No Retreat, No Surrender. I don't recall any slow-mo in that one, but it's been forever since I've seen it. But a huge chunk of his stuff in the 80's and 90's was consistently slow-mo fights, which never really displayed his fighting abilities accurately. Yea it looked cool, but at the same time it always left me wondering if he could actually pull off a full-on hand to hand fight sequence without the use of slow-mo and quick editing. If there's one thing Double Team does, it's prove that yes, Van Damme can indeed hold his own in a kickass fight sequence without having slow-mo as a backup. I'm sure there are other films of his that display this, but I truthfully haven't seen any and I've pretty much skipped anything he's done after Knock Off in '98 because it was just so terrible and he looked like he'd pretty much already given up at that point. Refreshingly here, it's the fastest I've ever seen him and it looks legit.

Absurdity is the name of the game. Oh man, what a ridiculously dumb this film is. And I say that with nothing but positive sincerity. But....wow. I lost count how many times I rolled my eyes or audibly said "huh??", or "you've got to be kidding me". Seriously, what the fuck is going on in this thing? It was like the concept of any kind of realism or common sense was thrown out the window so that they could just throw more insanely over the top action at us. And gawd bless them for that. It's because of this that Double Team manages to keep you invested because you can't believe what you just saw and you wonder how they'll manage to top it in the next few minutes. And they do. Every time. The amount of nonsense in this is so insane, but that's why it's so great! It's done in such a fun/over-the-top/cheesy way that it makes the film so much better all around. 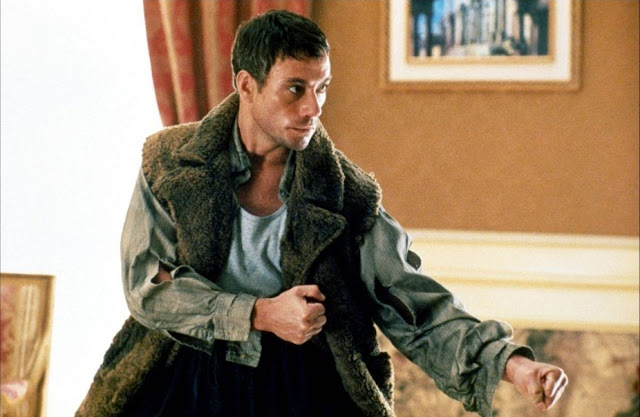 Super slick style from director Tsui Hark. By this time Van Damme had become known for bringing Hong Kong's biggest directing talent over to the U.S. for his films, starting with John Woo for Hard Target in '93, and then with Ringo Lam for Maximum Risk (which I have yet to see) in '96, followed by Tsui Hark for Double Team the following year. It was a spirited idea, and one that worked well for him for a while, but that charm had already worn off following this release, because when Van Damme re-teamed with Tsui Hark again for his next film, it was a disaster. He would continue a few more times with Ringo Lam, but the results were mediocre at best, going straight to video. But with this film however, Hark does an outstanding job behind the camera, giving the film a frenetic look and energy.

I've been somewhat of a Tsui Hark fan going back to the early 90's when I first discovered him after having seen a film called Dragon Inn (1992). While he wasn't credited as director on that officially, it was my first introduction to him and the films I followed that with were Zu: Warriors of the Magic Mountain (1983) and Once Upon a Time in China (1991). I've since seen a large chunk of his films and he's become a hit or miss director for me. Some of his films are great, but most of them are not. Kind of the same way I feel about Takashi Miike. While the guy can turn out a solid genre film, he can sure turn out some crap too. So it was with this line of thinking that I went into Double Team a little on the skeptical side, only to be pleasantly surprised, or shocked rather, that he did a bang-up job on this one. It's fast, slick, and fun. 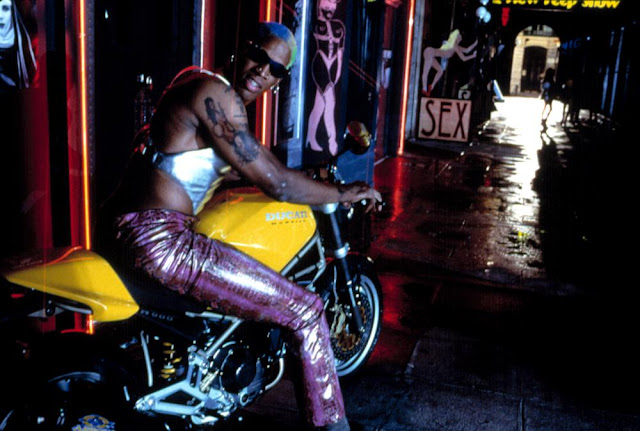 Interesting casting. I guess I should start off with Dennis Rodman, since the guy is all over the cover and promotional material. He's not bad. While he had already been in several television shows playing himself, I think this was his first big acting gig playing another character. *Don't bite my head off if I'm wrong though. You can tell he's no actor, but there's still something there, an eagerness, or an earnest, to do a good job. You can see it and you can tell he really tries hard, which goes along way in a film like this. It doesn't hurt that as a human being, he's very imposing, especially when standing next to Van Damme, who's a little on the short side. Director Tsui Hark does an excellent job making  him larger than life and strong like a giant in the fight sequences, which were a lot of fun seeing him literally throw his opponents across a room. It was awesome.

Mickey Rourke is another standout. By this time, Rourke had been relegated to strictly DTV work. Once great and knocking out tour de force performances, his bad boy image and personal problems began to take center stage and he just wasn't being offered the roles that he deserved. It's a shame really, because he's brilliant. Seeing him play the villain in an action film was surprising at first, and amusing, but he pulls it off well. He's another physically imposing force here. I'd actually never seen him look so big and ripped before. Having just seen a few of his earlier films like Year of the Dragon, Angel Heart and Johnny Handsome, where he's somewhat scrawny. Seeing him so large was sort of a shock, but it makes him a great foe for Van Damme's character, even down to the hand to hand fight scenes.

There is no bad. Double Team, while insanely ridiculous, absurd and dumb, easily makes up for that by being fast, loud and a helluva lot of fun. This was so much more entertaining than I was expecting it to be. You think of how all these one-time badasses like Seagal, Norris and even Stallone were really just left in the dust of the big budget action flicks, making tired and mediocre films in the Direct-to-Video market just to make a quick buck. It was refreshing to come across a good one for a change in the middle of all of these. In the end, Double Team is better than it has any right being. A last hurrah for Jean-Claude Van Damme if you will, before his 2008 comeback with JCVD.