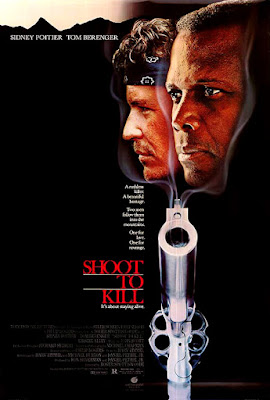 The good:
Great cast. Every single role in this is anchored by a notable actor's strength's, and the result is an exceptionally tight thriller made all the better with an outstanding cast. Tom Berenger is one of the most consistently reliable actors out there, and back around this time when he was considered  A-List , he gave us some very memorable performances in films like Platoon, Someone to Watch Over Me, and Major League. Sydney Poitier had taken a 10 year break from acting (though he still directed 3 films in this acting hiatus), and came out of his semi-retirement with this film. I don't know for a fact if he was retired, or just taking a break, or if something about this film in particular pulled him out of that. Maybe he was just ready to return to film work and found this film to be the right one. What I like about that idea is that he could easily have chosen a simple project, because one thing you will notice within the second act is that this is a seriously challenging role physically, and for someone his age, I was surprised he was able to do it. In fact, it's rather impressive. I don't know a lot of other actors the same age willing to pull all that physical stuff off convincingly. The guy seemed to go out of his way to do a lot of physical stunts himself, when he could easily have had a double do it.

Strong direction. Roger Spottiswoode has never been an interesting director for me on a visual level. Sure he get's the job done, but you can't really "identify" a Roger Spottiswoode film just by his visual aesthetic the way you can with a lot of other directors. Yet here he does an outstanding job behind the camera and it was a solid surprise for me. While everything is shot pretty straight-forward, it's this technique that really works to the films advantage, and most importantly, he keeps the camera still, which was another big surprise. Since a huge chunk of the film takes place in the wilderness, you'd think any director would take the easy route and use handheld on the uneven terrain, but surprisingly he doesn't, and nearly every single shot, no matter how difficult, is done without the use of steadicam or handheld, which was an achievement on it's own.

Great stuntwork. Another surprise for me here. There's just really something to seeing a guy actually hanging off the side of a cliff, and not done using a green screen or CGI. Even today, no matter how hard they try, they still can't make it look real, so to see stuntmen and the real actors falling off a cliff, hanging from a thin rope, or interacting with a real bear, well it's just really something to see. It adds so much more intensity to the scenes when it really looks like they're in real danger, as opposed to the other way when you can tell they're just hanging in front of a green screen.

Delivers the thrills. I didn't know what to expect going in, other than I knew some of it took place in the wilderness. I was surprised to see that while that is true, the film both starts and ends in the city, giving the film a more broad scope in terms of location and geography. When it comes right down to it, the film is tight, taught, and filled to the bring with suspense and thrills. The film does a great job in keeping you guessing as to who the killer is, but the biggest downside to seeing this so many years later is that you know who the killer is automatically once you see the credits and hear the voice of the killer on the phone in the early scenes. Still, it doesn't take away from the film at all. You still have a great time watching the filmmakers try to conceal the identity until much later in the film.

The bad:
There is no bad in this film. Honestly. I couldn't fine a single aspect to nitpick, which is a very rare thing. This film was just about as perfect an 80's thriller as could possibly be and from beginning to end, I loved every second of it.
Posted by robotGEEK at 12:39 PM