Fox's The Exorcist Needs Your Help 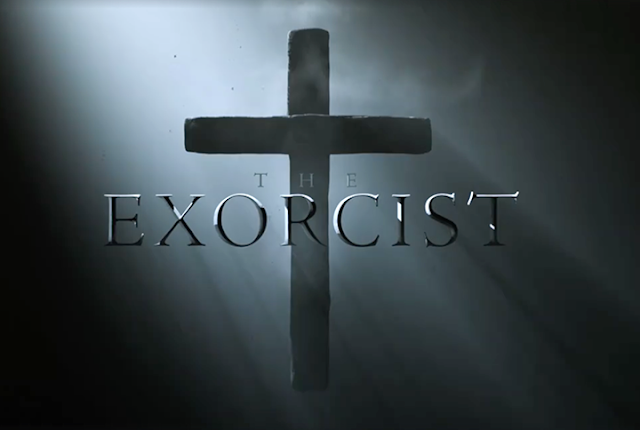 So here we are again, another great show barely past it's first season and already in fear of being canceled due to lack of viewership. Much like the excellent and highly underrated Hannibal, Fox's Exorcist show seems to have flown under the radar of most mainstream television viewers. Maybe it's because they're not generally a fan of the films, or maybe they're too scared that it might actually be too scary for them. Whatever the case may be, Unless people actually watch it, it's highly unlikely Fox will greenlight a season 2, which would just be a huge travesty.

I have to admit, I myself wasn't really too keen on the idea when I initially heard about it. I just kept wondering how they could expand on that storyline, or would they try to just totally redo the same story all over again? I didn't know, but since I rarely ever watch TV to begin with (We pretty much stick to streaming from Hulu, Amazon and Netflix for our TV shows), I didn't know what to expect - I was slightly skeptical. I also didn't hear too much in promotion for this show, but like I said, that's all on me since I don't watch TV. But one evening as I was browsing Hulu Plus for a new show to watch, I noticed they had a few episodes of The Exorcist already available to stream as we were towards the beginning of the season and Hulu was making them available the following day as each episode aired. So really, on a whim and also out of curiosity, we threw on the first episode. 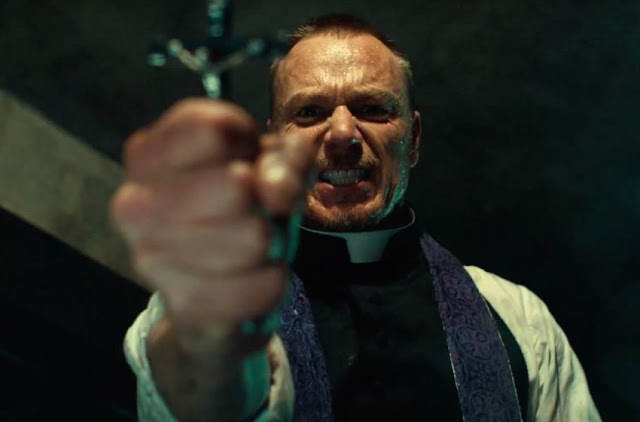 While I can't truthfully say we were 100% hooked after that premiere episode, it was good enough to keep us invested and see if it picked up some steam. So we trudged on and I'm so glad we did because with each new episode, the show became stronger, better, and more intense. While I will admit it took a good 2 or 3 episodes for it to really find it's footing, the payoff was worth the wait. Big time.

As I mentioned earlier, each episode only grew stronger and more riveting, grabbing us to the point that we just couldn't wait for the next episode to air so we could stream it the following day. We were hooked in a very big way, the same way were were for Hannibal. This series has all the trappings of a great show, full of surprises, twists and turns, intensity, great performances, and a new take on the material I was not expecting.

I don't want to spoil it for you by giving too much away, but let me just say that The Exorcist did not play out the way I was expecting it to, and that's a good thing. The Exorcist defied my expectations for the better, and when it was all said and done, it blew me away. Having just finished the last episode, which was awesome and a fitting finale to a great show, it left us sad because it was over and we just wanted more. I am hopeful though, as it ended with some open subplots and loose ends, I'm assuming in the hopes that the series gets renewed. 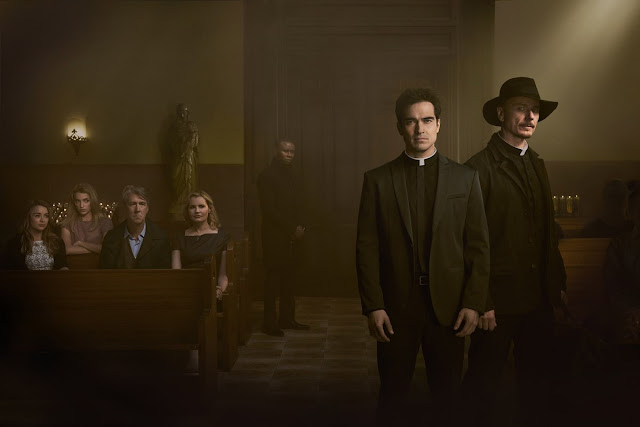 One of the big surprises for me, next to the story and revelations, was it's excellent cast. Of course we all know who Geena Davis is, and I for one was surprised to see her in this. Only because I haven't seen her in anything for what seems like ages. Apparently she has been working steadily since the last time I'd seen her, but it was all for shows and films I don't care for personally like Grey's Anatomy. The other welcome surprise was Alan Ruck, playing the husband of Geena Davis' character. While I have seen him pop up from time to time in TV and film, most notably for me as a passenger on the bus in Speed, he will always and forever be known as Cameron Frye in Ferris Bueller's Day Off. The two standouts however are Ben Daniels as Father Marcus, and Alfonso Herrera as Father Tomas Ortega. They are the driving force of the series, and if it were not for their strong performances as flawed, yet deeply dedicated priests, I doubt the show would have been as good.

I urge you to please watch this show. It's better than you expect going in, and if you stay with it, you will be rewarded with one of the most intense, and best written shows on network television. It's currently available on Hulu Plus in it's entirety, but I don't know for how long. We need to help spread the word and get the network to see just how deserving this show is of a second season.
Posted by robotGEEK at 11:09 AM