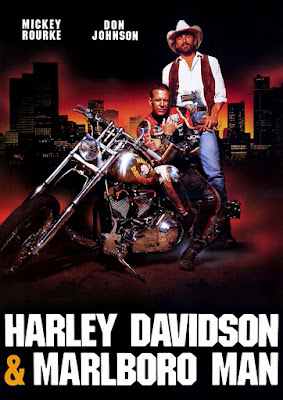 Harley Davidson and the Marlboro Man is an action film that came out in 1991 and starring Mickey Rourke and Don Johnson. I remember this one, but never really had the itch to actually see it. Mainly because the director, Simon Wincer, was someone I just didn't care for very much. He reminds me of another one of those everyman directors like John Badham, John Glen, Roger Donaldson and Roger Spottiswoode. The kind that can get the job done, but don't really add any kind of visual substance or style. I'm a very visual person. I'm also a visual learner. I really have to enjoy a film on a visual level to really get into it. If it looks lazy, I lose interest pretty easily.

Recently though, a friend of mine was surprised that I hadn't seen it yet, and told me that I absolutely needed to. I was intrigued. And hey, what a team up of Johnson and Rourke. Maybe there was something to this that I was missing. So on a Saturday night, I made this my Saturday Night Movie.

While HDatMM didn't blow me away or anything, it's still a very satisfying and fun early 90's action flick. It delivers the goods, the action, the laughs, and the fun in spades and won't let you down if this is the kind of thing you're looking for. As I feared, director Simon Wincer didn't really wow me with the look of the film, but it has several other strengths that make up for it. Number one being the cast. Johnson and Rourke are just fantastic in their roles and play off each other really, really well. So much in fact that I kind of wish they had made more of these. But it also boasts a rather impressive who's who in this large ensemble cast like Chelsea Fields, Giancarlo Esposito, Robert Ginty, Tia Carrere, Vanessa Williams, Daniel Baldwin, Tom Sizemore, and the list just goes on and on. It's kind of ridiculous how many familiar faces are in here, but all in a fun way.

One thing that took me by surprise was how bizarre this film was. It's hard to even explain just how, but it's kind of weird.......in a good way. Like you have to take anything that happens with a grain of salt, because much of it is absurd and unbelievable, with zero sense of logic. But that's the beauty of these types of films. They're not trying to be anything other than mindless fun, and that's exactly what they've set out to do and pulled off splendidly. Sure you'll probably why there's a gang of killers walking around in black leather trenchcoats zipped up to their chins without arousing any kind of suspicion, even considering it looks to be 110 degrees outside. Or the fact that there's never "ever" a cop around in all the endless gun battles, explosions, and car chases. But I think that's part of this films charm - the ridiculousness and unbelievability aspect, which this film proudly wears on it's sleeve. You just kind of have to check your brain at the door and just go along for the ride.

Mickey Rourke had just come off a string of strong, solid films like Johnny Handsome, Desperate Hours and Wild Orchid. For me though, it's the first time I sensed a change in his face. There's something.....different, mainly his teeth, which are obviously new and too perfect and white. And aside from his physical appearance, he comes across strangely subdued in this one, like he's not really even trying. I don't know, it could very well be the direction he was given, or the way the character was written, but I oftentimes found it hard to make out what he even said because he either mumbled or whispered his lines so frequently that I eventually had to switch over to subtitles. Yet, it's also a physically demanding role and when the shit hits the fan, he get's the job done.

Don Johnson was a revelation. Having just finished his Miami Vice series the year before, and still not really making it big on the big screen with films like Dead Bang (1989) or The Hot Spot (1990), seeing him play a rough and dirty cowboy was such a blast. He pulls it off flawlessly and yet, he comes off as the most charming and charismatic character in the entire film, which is a true testament to his abilities.

As fun and action packed and weird as this film was, I can't help but feel it could have been a much better, bigger, and louder film with someone else behind the camera, someone else with more experience and more of a visual punch than Australian director Simon Wincer. If you've never heard of the guy, there's a good reason. He's responsible for a handful of popular films, but not because he directed them. For example, he's directed The Phantom, Free Willy, Quigley Down Under, and even D.A.R.Y.L., yet you'd never say something like "Oohh Simon Wincer directed that!" the you would with someone like say Tony Scott, John McTiernan, Renny Harlin, or Craig R. Baxely. He doesn't put that kind of stamp on his films, and that's a shame, because of all the films in his filmography, this one really could have benefited from one. With that being said, HDatMM still kicks a lot of ass and ultimately ends up being a helluva lot of fun. You'll definitely have a good time with this one.
Posted by robotGEEK at 2:10 PM