James Bond Crashes and Burns; A View To A Kill Film Review 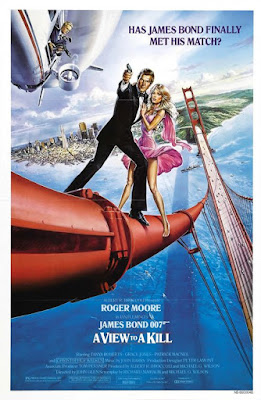 I should begin by saying I've never really been a Bond fan. Maybe just a casual fan if anything. And to be honest, if I ever make the effort to go see a new Bond film, it's usually because I'm more excited about who's directing it rather than the film itself. Skyfall would be a great example of that. That's the only Bond film I can recall actually going to see at the theater and that was only because Sam Mendes was directing and I was really excited to see what he did with it. But yea, even growing up as a film obsessed kid in the 80's and 90's, I never made any effort to see them. They just never appealed to me. But recently I started to wonder if I had been missing out on some great, or fun, films. I mean, there's got to be something to them, otherwise they wouldn't have made so many. Since Hulu Plus began carrying all of them (I think), I took this as a chance to finally start my immersion in the James Bond 007 films.

I decided to start off with this one because it appealed to me the most for a number of reasons. First, it's from 1985, with a title song by Duran Duran, and with a cast that includes Christopher Walken, Tanya Roberts, Grace Jones, and Roger Moore in his final Bond film. So I mean shit, just with all this talent right here there has to be a good film in here somewhere. Sadly, there isn't. 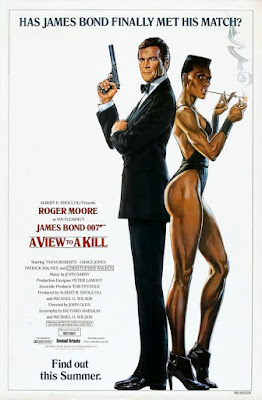 While I guess I did go in with some high expectations (who wouldn't with a lineup like that?!), A View To A Kill is a surprisingly dull, slow, and boring affair. Hey, I was just as surprised as you. Knowing that this was Moore's final time playing Bond, I had hoped they would have sent him off on a high note. But we're instead treated to a sometimes cheesy, silly, and oftentimes tedious story about a megalomaniac (Walken) who has a plan to destroy Silicone Valley. The main problem is that for a 007 film, there's just so much talking, and not enough action, espionage, or even thrills. And while you would think the year (1985) would offer some prime 80's cheese, it didn't. Director John Glen, who by now had directed the 2 previous Bond films For Your Eyes Only (1981) and Octopussy (1983), just kind of seems to be going through the motions with this one. While the film both started and ended with a rather impressive action sequence, the majority of the films looooong running time is excruciatingly uneventful. The only thing that really kind of let's the time pass by just a bit easier is seeing the above mentioned trio doing their thing and chewing up the scenery. Walken is always a blast as a villain, and Grace Jones was fun to watch playing his bodyguard/love interest who can literally lift men above her head. That was pretty cool. But I think the most enjoyable was the silly and highly absurd relationship between Bond and Tanya Roberts character. I mean, it was ridiculous. She continuously rejects his advances, and doesn't really know if he is who he says he is, yet walks, sleeps, and struts in the skimpiest of outfits. I'm not complaining, but in the context of the story, it was dumb.
fact of the matter is that

There were other things too, like a horribly choreographed and executed fight scene inside a house, and some bad green screen work that really just kind of put a damper on the whole experience.

I could go on, but I'm just not up to it. Rather than letting Roger Moore go out with a bang, it's much more like a whimper, which is such a shame because to me, he was the best Bond. His take on the character was so different from anybody else, and maybe it was nostalgia because he was the Bond when I was growing up, but I think it's more than that for me. He exudes a cheesy charm, and his constant wink at the camera attitude was so refreshing. This film could really have been something special. It has all the right ingredients. They're all right here. It just wasn't cooked together very well at all.
Posted by robotGEEK at 2:21 PM