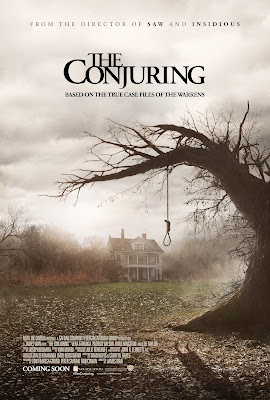 You know, I don't really ever go to the movies anymore. And if I do, it's almost always for a "sure thing" kinda film. You know, the one I know I will enjoy even if it's bad. With the sky high cost of tickets these days, it's the only way I'll brave the crowds and theater these days. But when I'm treated to a film, how can I refuse? Such was the case with The Conjuring, a film I knew nothing about other than the fact that it was from James Wan, who also did Insidious a few years earlier, also starring Patrick Wilson.

Insidious didn't do anything for me. For me, it had two things stacked against it. One, it was as paint by numbers as they come in the genre, and two, I couldn't shake the feeling that I was just watching a Poltergeist remake. Seriously, the similarities are shocking and I'm really surprised more people didn't make a stink about it. But anyway.

My expectations were not high for this one but I thought "what the hell? It's free.". Well, I'm happy to report that not only was The Conjuring a good horror film, but it's probably one of the best old school style ghost story films made in the last 20-30 years. To me, it felt like I was watching something made in the late 70's or early 80's with films like The Amityville Horror, The Changeling and Poltergeist immediately springing to mind. Plus, you have a film here relishing in old school practical effects and they work wonderfully. No CGI crap here.

Based on a true story, the story follows paranormal investigators Ed and Lorraine Warren, who also investigated the Amityville case, as they help the Perron family figure out what the hell is going on in there new farmhouse in 1971. While setting a film in this time period usually just comes off as a gimmick in most horror films, this setting works so well in it's favor this time around, adding that extra spice of dread and atmosphere usually missing in all these paint-by-numbers horror films these days. And kudos to director James Wan, who didn't impress me at all with his filmmaking abilities in Insidious, for taking that extra step and drowning this film in realism and not drowning the film in over-stylized filmmaking. This film looks simply shot and executed, and it adds so much to the impact of this film. And I honestly can't remember the last time I saw a film where so many people jumped and screamed as often throughout the entire film.

Great performances by everyone involved, especially Patrick Wilson and Vera Farmiga as The Warrens, great set design, great and effective practical effects work, great camerawork and pacing by director James Wan and overall, a great little and simple horror film that reminds you how horror films used to be made. Back in the day when they were good.
Posted by robotGEEK at 2:47 PM