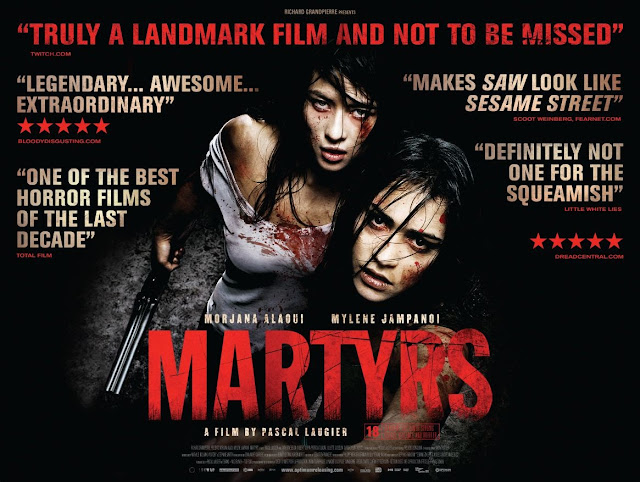 I love a good horror film. More than that, I love a well made horror film, a concept that is seriously lacking these days. I could literally just name maybe a handful right off the bat from the last 10 years or so. But this was one I never got around to watching until now. It's one of those titles that always popped up on certain "Best Of" film lists but I had just never gotten around to actually getting my hands on a copy.

Well I finally did and here are my thoughts.
Holy shit did this film kick my ass. It's so rare when a horror film "shocks" me. And this one certainly did with it's depiction of gratuitous violence, torture and sleek filmmaking. This was insane! And I can only agree with every quote on that poster. It is definitely not for the squeamish, it does make Saw look like Sesame Street, and it "is" one of the best horror films to come out in the last 10 years. I still can't get over how crazy this film was.

I don't think I really want to dig anymore into this because I went in knowing absolutely nothing about it and my experience was all the more entertaining for it. So you should too. I think the last time I was affected by a film like this was when I saw Ji-Woon Kim's I Saw The Devil about 2 years ago. This doesn't happen very often, and it shouldn't either because when it does happen it's like a kick in the nuts.

For me one of the pluses (and it's BIG plus) with Martyrs is it's amazing practical effects. Seriously, you just don't see this shit anymore and it's such a shame. And this is jam packed to the max with outrageous gory practical effects work and I love it. Great production value and performances only make this experience even better.
Another standout about Martyrs, which took me by surprise, is that it's like 2 different films cut in half, much like From Dusk Till Dawn. With Martyrs, the first half I would describe as a revenge film. And it's very well made and the intensity vibe flows smoothly. And then right smack in the middle it takes a huge detour and when it's all over you're kind of left numb and shocked, or at least I was. But in a good way.
So anyway, yea. Get your hands on this. And if you've already seen it, let's discuss!
Posted by robotGEEK at 10:26 AM