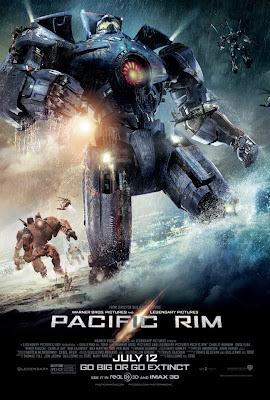 Do I really need to sell you on this one? It's got giant robots. Giant Monsters. Directed by del Toro. Surely you would think that would be enough to wet any geek's appetite. But you know what? Shockingly, and against all predictions, Pacific Rim bombed. Why? I honestly have no clue. For a true filmgeek, it's got everything you would want in a big bad epic sci-fi film. But wait, let's make it even more badass. It's a big budget sci-fi epic written and directed by Guillermo del Toro. Sounds awesome right?!

So is it what all I hoped it would be?
I would have to say yes. It was as awesome as I hoped it would be and then some. Is it perfect? No. While del Toro amazes with some pretty spectacular effects work and movie magic, one crucial thing Pacific Rim does lack is a touch of his signature creative narrative and storytelling. But who gives a fuck?! It's a film about giant robots fighting giant monsters! And in that area, PR delivers on all fronts full throttle. Holy crap can del Toro direct destruction, carnage, mayhem and kickass giants vs. robots fighting. Let me just say, Michael "I forgot how to direct films after The Rock and just kinda throw my camera up in the air now" Bay could take some serious filmmaking lessons from del Toro. One of the things I love about PR is that in all the craziness that ensues, you can actually see what the hell is going on. And let me tell you, this film gets fucking crazy as shit!! It's rare when I get excited for a big budget film like this. Hell, I still haven't even gotten to go see Man of Steel yet. But watching PR I felt like a little kid again. In shock and awe at the sight of giant mecha's battling it out with giant monsters emerging from the sea. It may not be making any money stateside, but I know it's doing decent business overseas. And when the dust has settled and PR hits blu-ray, it will dominate. It will be a sure fire hit and it will be a cult classic for years to come. I know this. I predict it.

So let's get away from the awesome effects and battles and get down to one of the things a lot of people have been complaining about. The casting. The cast here is .........unique. You've got some standouts like the always great Idris Elba and of course the del Toro mainstay Ron Perlman. But in a little bit of surprise casting there's Charlie Day from It's Always Sunny in Philadelphia who practically steals the show in every scene he's in and is hilarious. As far as everyone else? They show up, say their lines and do their jobs fine. There wasn't a bad actor anywhere, just not any great ones. I hear a lot of complaining about the main character played by Charlie Hunnam (Sons of Anarchy). How he's wooden and stiff. I didn't think he was all that bad. Not memorable in any way, but he wasn't bad either. But who gives a fuck?! It's a film about giant robots fighting giant monsters!

Clocking in at a little over 2 hours, Pacific Rim is like a geek's wet dream. Crazy action on an insane and epic level that goes further and goes beyond places I hadn't imagined done by a true filmgeek. 'nuff said.
Posted by robotGEEK at 6:17 AM