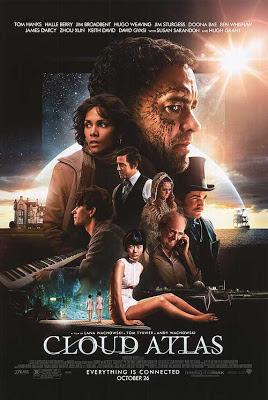 Ok, cheesy opening is over. But in all seriousness, it's pretty damn accurate. So much about this film just blew me away. So much more than I was prepared for honestly. In the theaters, this made nothing, realistically becoming a certified bomb. At least here in the states anyway. And even with it's DVD and Blu-ray release, there was little excitement or promotion regarding it. But I had a friend who saw it (the only one) and he said it as pretty great and I usually trust his judgement soooo.....

He was right. Right from it's opening I was impressed and enthralled with these worlds and storylines created that all in some way connect. It may not always be apparent, and I'll admit I should probably give it another viewing or two to fully understand how that all worked but overall, it was amazing. But it's hard to say how really, because it just "is". Certain sections could be classified as drama, period, adventure, sci-fi, romantic and so on. Each story is different, and in a different genre (repeating myself),  but it all works and comes together so well.

The Wachowski's have been such a hit or miss team of filmmakers. After literally changing the way films are made forever and inventing new techniques, stunts and sequences that have only been copied over and over since the original Matrix, they haven't really blown anybody away since, even with The Matrix's 2 subpar sequels, which only gets me on another tangent entirely. Those sequels really just ruined an already almost perfect sci-fi film and it's universe. For me, they just felt so self-indulgent. Like, they felt the need to have to explain every single little detail in that universe, which only ruins the whole mystery and leaving nothing to the imagination. And even worse, simultaneously not making anything any clearer!! But whateva.

Cloud Atlas has a few things stacked against it though. Things that might explain why the film just didn't receive the reception it should have. First let's start with the marketing. It was off, yet after watching the film I have no clue how the proper way would have been to market this thing because it's so undefinable. Its'a all over the place, but in a fantastically good way. So I can't really blame the marketing team for that because I mean, how could anybody have done it any better? So kudos for at least trying. But I'll admit the trailers never got me really excited about seeing it.
Let's also look at the cast. Hey, Tom Hanks and Halle Berry are Oscar winning actors and with the right material, they're great. But having them headline a huge sprawling multi-genre epic by the one and only Wachowski's and I mean, it doesn't really get you all that excited. Not to disrespect those two fine and worthy actors at all, but they're just not the first two names to pop in my head when I think epic. But you know what? They were just truly fantastic in every single storyline and every single character they played. I was exceptionally impressed. So there you go, don't judge a book by it's cover.

What I love about this is that every storyline and specific genre works so well. I can't remember a single one that "didn't" work. More over, I was actually moved by a few, excited by a few and enthralled by almost all of them. Just truly epic storytelling overall and I can't recommend this one enough. Trying to explain or give some kind of idea about what the film is about would be impossible, and I wouldn't want to give anything away. So it's best you just experience it yourself with fresh eyes and an open mind.Those are my thoughts. Go see this now, you can thank me later. I should also note, it's 3 hours long. So make sure you have enough time to get this all in in one sitting.

Posted by robotGEEK at 1:58 PM