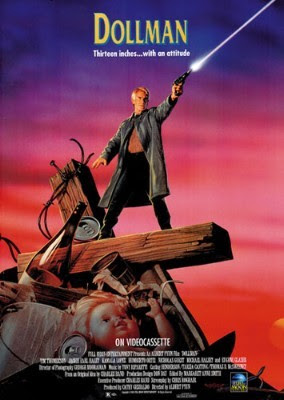 Ya know, I may be one of the few people I know that loves Albert Pyun films as much as I do. I really do. For me, when he's firing on all cylinders, the guy can make some badass films. Nemesis and Cyborg are some of my all-time favorite films. Brain Smasher: A Love Story, which I just saw about a year ago, was a helluva lot of fun. I may be in the minority with this one, but I enjoy his Captain America quite a bit too. With that one, I can see the potential. I can see what he could have accomplished had he had the resources. Sure the action sequences are few and far between, the Red Skull is Italian (huh??), and it's pace is way too slow, but you can't deny the badass action sequences are indeed badass when they finally show up. There's just something about the way he shot and edited those particular sequences that resonate with me. They represent the best of what Pyun has to offer in terms of style and impact. Crap, I'm getting off track here.....

So yea, Dollman. For some reason, I hadn't seen this one until now. No real reason, just never got my hands on a copy. I even had it in my Netflix Queue forever and when I finally decided to watch it, it was unavailable. Don't you hate it when that happens?! A few weeks back I came across a Japanese VHS copy of this online and couldn't resist. I think it was the push I needed to sit my ass down and watch it. So what did I think?

I can kick myself for not seeing this sooner. I looooooooved it. Loved, loved, loved it. I can honestly put this up there with my Pyun favorites. Dollman came out in '91, that period in time when he possessed this particular stark style of filmmaking. Cyborg, Captain America, Dollman, Nemesis; they all possess an almost identical visual tone, my favorite of his ever shifting and changing styles. Dollman can and does fit right smack into the worlds created in some of his films like Cyborg and Nemesis.

I think maybe one of the reasons why I waited so long was because, just with the premise alone, I was worried that the effects work would be so terrible that it would take away from any enjoyment I might have with this. I mean, immediately my mind is picturing awful blue screen work. This did go straight to video after all. But you know what? I could literally count the cheap looking blue screen effects shots on one hand. Instead, Pyun films about 90% of the effects work on set or in camera using old school camera tricks. Gotta love it. And you know, Pyun can get pretty creative with his camera work when he wants to. But you know, like I stated before, his style shifts and changes a lot and some of it just doesn't work for me. I like this era in Pyun's career personally. I do need to also point out that I haven't seen everything he's ever done, because there is a "lot" of it. There are quite a few I keep meaning to seek out, and I will eventually. So I'm sure there are quite a few other gems in store for me. Like the total surprise at how much I enjoyed Brain Smasher. I really did. A very fun and enjoyable film.

There were a few surprises in store for me with Dollman. For one, the creative way he shot the film and still made it look awesome. But another would be the high body count and practical effects he used. Nothing like some good ol' fashioned pre-CGI violence. But I think the biggest surprise for me was seeing the one and only Jackie Earle Haley (Watchmen, A Nightmare on Elm Street "Remake") as the main baddie in here as a gang leader in the midst of a turf war that has Dollman stuck in the middle when all he wants to do is just try to get back home. I don't know. I sure as hell wasn't expecting it and what a surprise to see him in this. Aaaaaand of course, Tim Thomerson is just always awesome.

Albert has said that he wasn't involved in the post production process of this film, at least I'm pretty sure that's what I read from one of his Facebook statements (if I'm wrong, Albert please correct me), so I'm curious to see what his ultimate vision would have been like considering I enjoyed this one so much already. Maaaaaaybe we'll get an Albert Pyun Director's Cut some day? That would be rad!
So I'm done here. If you haven't already had a chance to check this one out, definitely do so, especially if you're a fan of some of his late 80's to early 90's output.

For another awesome review of Pyun's badass classic, check out Hellford667's equally favorable review HERE.
Posted by robotGEEK at 11:40 AM