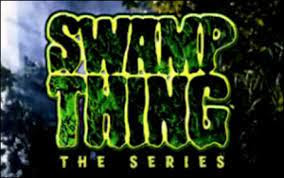 That's right! The original television series from 1990 is streaming for FREE on the ever-glorious TubiTV app. I swear, just when I think they can't get anymore amazing, I find some more gems on there and my "watchlist" just gets bigger and bigger. 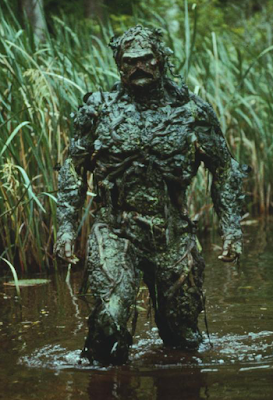 While I adore the 2 Swamp Thing films we got, the Wes Craven original and the Jim Wynorski directed and incredibly campy sequel, I never got around to anything related to Swamp Thing outside of those 2 films. Not the comics (which I hear are fantastic, especially Alan Moore's run), the toyline, the cartoon and neither of the live-action TV series, which includes this series, which ran for 3 seasons from 1990-1993, or the recent CW reboot that only lasted a single season before being unceremoniously cancelled with no clear reason.

I'm really looking forward to getting to finally check this out, which is even more fitting given the fact that I haven't watched the new cancelled TV series yet, even though I bought it on DVD as soon as it came out. So it would be nice to start with this version first, before diving into the reboot.

I would also like to mention that while I haven't yet seen this iteration of the character, I am a huge fan of comic book properties being developed into TV shows and movies from this era. I know I'm in the minority on this one, but hell, I just love the low-budget Marvel shit from this very period, like The Punisher (1989), Roger Corman's Unreleased Fantastic Four (1994) and Captain America (1990) movies, as well as The Flash (1990) * I know The Flash is DC, but you get my point* live-action series and The Incredible Hulk TV Movies. That She Hulk movie starring Brigitte Nielsen that writer/director Larry Cohen was supposed to do around this time would have been a winner too I'm sure.

Just in case you weren't aware, TubiTV is a FREE app found on most Smart TV's and Streaming devices like Roku. You have to watch commercials, but that's a small price to pay for hard to find movies and shows, most of which are in HD. Like any other streaming app, their selection changes month to month so it's always a good idea to watch something soon once you find it. I believe you can also go directly to their website TubiTV.com, and create a free account and watch all of their content on your computer or device.