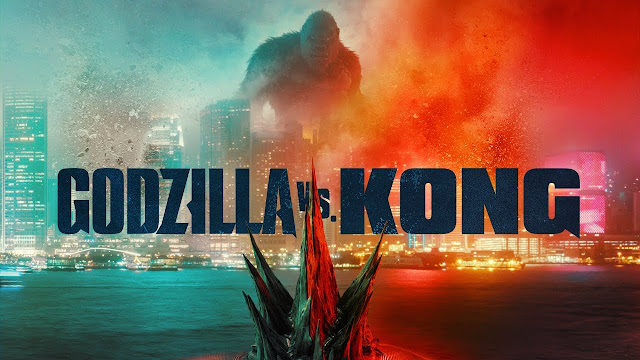 Loved, loved, LOVED THIS!!
There is so much I want to say, but I'll try to keep it short. But it will be so hard, because this was fucking awesome! Firstly, this was filled with so many surprises, not least of which was the much stronger sci-fi element this time around. I was not expecting that. And not just regular sci-fi, but TRON-INSPIRED SCI-FI! What the what?! This was like a sci-fi nerds (

) neon-drenched wet dream! And a synth score?! It was all too much for my nerdy brain!

I've seen people complain that they thought there wasn't enough Godzilla vs Kong fighting. I counted 4 giant battles, and that's not even including the other sequences of mass destruction and carnage between fights. That's a lot of destruction for a 113 minute movie. And besides, we need the human element to break up the action, or we'd be exhausted. Yea the movie is implausible and ridiculous, but so what? It's fun, stylish and literally delivers on the hype. It's a giant monster movie people. I can pick it apart if I wanted to, but who "wants" to? Unless you just don't enjoy fun movies. It's big, loud, fun and created a world I really was not expecting to enjoy as much as I ultimately did.
Speaking of which, let's talk about the CGI for a quick second. One of the things that turns me off about these big budget films is how poorly they handle the CGI. The last film was nauseating as it felt like a big giant video game. Just because you can zoom the image in and out and swing it around all over the place doesn't mean you have to. It's like they have this amazing tool, and always seem to go in the wrong direction with it. The guy who directed Kong: Skull Island (Jordan Vogt-Roberts) did it right, and better than any director has done so far with these, and that's probably why Kong: Skull Island is still my favorite of all these new films. But here it seems director Adam Wingard (The Guest) took inspiration from Skull Island in not only delivering some stunning visuals/camerawork, but in shooting the action in a way that you can actually see what's happening without getting nauseous, on top of grappling the whole concept of integrating live action with CGI in a way that doesn't look like you're watching Sin City or 300.
This MUST be seen on the big screen. It's something I will correct the first chance I get. It's a big budget spectacle at it's finest, and the trailers did not do it justice. All of my favorite parts were things "not" shown in the trailers, which ultimately gave me lots of joy since I was going in expecting more of the same with 2019's King of the Monsters, but instead got so...much...more.
Posted by robotGEEK at 11:00 AM