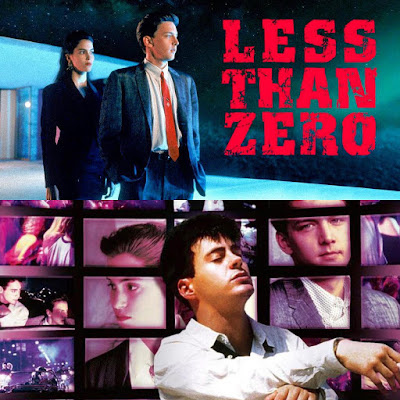 Goddamn. How have I never seen this before? It’s like an 80’s neon-drenched fever dream that’s shot like a music video, and I couldn’t get enough of it! There’s this constant sense of foreboding dread mixed with this almost parody-style look at 80’s excess to the max in this elitist world of the rich in California. Robert Downey Jr. was fantastic, and if he didn’t get an Oscar nomination for this, he should have. How surreal how his character in this film would ultimately mirror his own real-life struggles shortly after.

It blows my mind that up until this point, Downey Jr. was mostly known as the comedic sidekick in some classics like Weird Science, Tuff Turf and Back to School. In fact, when I think of him, this is the era my brain automatically goes to, the 80's comedies, because that is what I grew up on. Where the hell did he pull this powerhouse performance out of???

Going in, I was not aware this was based on a Bret Easton Ellis novel, so that was another surprise. And Marek Kanievska, mostly known for doing television work up until this point, does an absolutely outstanding job in the directors chair with his second theatrical release. As slick, stylish and professional as it all is, it still carries this intense look, feel and vibe of an MTV music video, which is both fascinating and amazing.

A warning though. It is sometimes tough to watch and is a bit all too real for those who suffer from drug addiction, or know someone, whether a close friend, loved one or family member, who does. I can see how this could trigger some people because it's incredibly on point in it's depiction of addiction and how it affects those around them. It's also incredibly dramatic, but in a fundamentally important way.

Last I checked, it was streaming on HBO Max.
Posted by robotGEEK at 2:55 PM