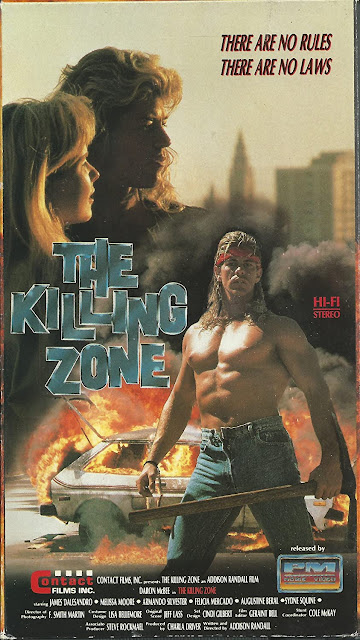 While this particular film had been sitting in my "Amazon Watchlist" for a very long time, it wasn't until watching the Bad Movie Night masterpiece L.A. Wars recently that I finally felt compelled to give this a try. Why you ask? Because this is written and directed by the same guy (Addison Randall) who wrote L.A. Wars, as well as the hilariously awesome Shotgun, and if those films are any indication, I knew I was in for a good time.

When a Mexican drug kingpin vows to avenge the death of his drug kingpin brother, it's up to ex-con Garret Bodine (Deron McBee) to help the police and keep his town safe.

While not nearly as great as L.A. Wars, The Killing Zone did not disappoint. And to be quite honest, it was better than I was expecting. So let's get to it.

Now this is really low-budget. While it may be under the almighty PM Entertainment's banner, I'm pretty sure it was a film they acquired after the fact and released under their name, because PM has a very specific quality to their action, and sadly, none of that is in here. That's not to say that the action scenes aren't entertaining in their own right, because they are. Just in a totally different way. Meaning, they're entertaining because they're so bad. Filled with random shootouts, it's the reaction shots of the people actually getting shot that are hilarious. I can't remember the last time I laughed out loud as often as I did by the reactions of those getting killed. It's hilarious!

The fun doesn't stop there! The film looks so cheap that the opening and ending credits look like it's an 80's TV show. And the music, while highly entertaining, sounds like they're taken right out of vintage Nintendo games. Seriously, you can take so much of the music in here and insert them into any old NES game and it would fit.

If you've had the pleasure of watching L.A. Wars, then you know what kind of hilarious dialogue to expect. Former American Gladiator and wrestler Daron McBee is amazing as the lead. He's so over the top in so many ways (the way he dresses, acts, and just being so goddamn huge in general) that he sells the shit out of it. It's a shame he never made it as an action hero in the DTV market the way Brian Bosworth and even Roddy Piper did for a brief time. He had the goods!

My only real complaint was that the film did a great job building up to a finale that promised to deliver a really big payoff of revenge. But when it was all said and done, the ending fell flat compared to it's promising conclusion. Nothing in the final act measured up to anything that happened leading up to it. And let me tell you, there's some great stuff in this film. One particular scene that stands out is when a mute bodyguard takes on a whole gang. There's so much fancy handwork going on in this fight that you almost don't even notice that none of his punches land, which is hilarious, and a guy who attempts a karate kick ends up losing a shoe in the middle of a kick as it goes flying clear across the screen!

While the ending is a bit weak, The Killing Zone is still a lot of fun. Hilarious action and dialogue, a larger than life lead, and some of the funniest kills I've ever seen in an action film....ever. Do yourself a favor give this a watch. It was the perfect solution to my dead Saturday night. It's not a good action film, but it sure as hell is a fun one.

The Killing Zone is currently streaming on Amazon Prime.

Posted by robotGEEK at 2:00 PM