My Science Project Coming Back To Blu-Ray! 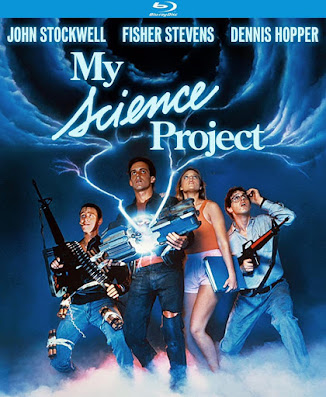 I recently revisited this out of the blue, for no real reason other than it had just popped in my head and I felt like revisiting it. To my surprise, I quickly discovered this is a very hard film to get your hands on. Or at least in widescreen. From what I could gather, it only ever got a single DVD release, and it was in the dreaded full frame. There are a few uploads on YouTube, but they're all shit quality. Mill Creek actually released this on Blu Ray back in 2016 (I had no clue), and quickly went OOP. So of course it goes for insane money on the secondhand market. I'm talking anywhere from $50-$200 for a film that I barely remember and am not even sure if I'll like at this age. However, I was both lucky and surprised to learn it was released in widescreen on VHS in a Collectors Edition Clamshell Release. So thankfully I did get to finally see it in all it's widescreen glory. As for the film itself, I'll post a review on it sometime soon when I can find the time. But those of you who've wanted to either revisit this 80's cult classic, or check out this oddity for the first time, there's great and "affordable" news.

Kino Lorber will be releasing this as part of their "Classics" series on December 8th. From the looks of it, we're not getting any special features, which seems to be the norm for KL releases, but we are getting this in HD and in widescreen. Oh, they're also going back to the original "unedited" poster art. If you recall with the Mill Creek release in 2016, they hilariously edited out the machine guns, which was so ridiculous. As you can see here in the cover, guns are in tact.

Here are the details via Amazon:

• Audio Commentary by Film Historians Mike McPadden and Kat Ellinger• Lossless 2.0 Stereo Audio• Theatrical Trailer• Optional English SubtitlesColor 95 Minutes 2.35:1 Rated PGMichael Harlan (John Stockwell, Losin’ It, Christine, Top Gun) has procrastinated on his science project until the last minute, and his teacher (Dennis Hopper, River’s Edge, Blue Velvet, Speed) issues him an ultimatum: turn in a science project or flunk. So, Mike scavenges a military base’s junk pile for a suitable gizmo to pass off as his project. He finds one... and unwittingly unleashes the awesome power and energy of the unknown. Twisted dimensions… time warps… a fantastic realm where the past, present and future collide in a whirling vortex that takes the class on a startling adventure through time and space. The wonderful cast includes Danielle von Zerneck (La Bamba), Fisher Stevens (Short Circuit), Richard Masur (Scavenger Hunt), Barry Corbin (Stir Crazy) and Ann Wedgeworth (TV’s Three’s Company).

You can pre-order this directly from Amazon HERE. And I highly suggest you do so, because it will most surely sell out as it did before. My Science Project is set to release on December 8th.

Posted by robotGEEK at 7:54 AM