Haunt; One of the Best Horror Movies in Years 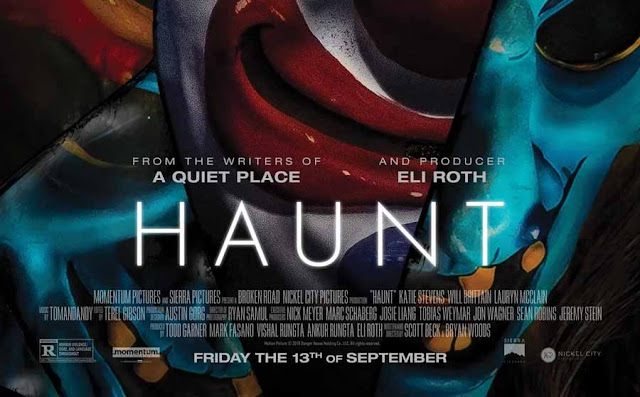 Released in September of this year, I was only made aware of this film after a Facebook friend posted about it in a movie group recently. Intrigued, I looked it up and found that it's produced by Eli Roth (a much better producer than he is a filmmaker) and written by the team who wrote the excellent A Quiet Place. I was sold. The following weekend I rented it on Amazon and hoped for the best on a Saturday night. Let's dig in.

In short, Haunt (not to be confused with the film of the same name from 2014) was absolutely great and just what I was hoping for. Given that a ton of these "haunted house theme" films come out every year around Halloween, it's refreshing that a new one can come out and floor you in a way that 90% of them don't. While there's nothing necessarily new here, it's in the professional way it's all laid out and put together that makes it stand out.

A group of friends decide to try out a new Haunted House Attraction after finding a flyer after leaving a local bar. Once inside, they quickly realize that what are supposed to be scary displays might actually be real. Once they try to leave, they soon discover the truth.

Written and directed by Scott Beck and Bryan Woods, Haunt delivers the goods tenfold. The story is pretty simple, but it's execution is done in such a brutal and intense way that you're left squirming in your chair for so much of it, while simultaneously being drawn by its intensity. The kills, violence and gore are exceptionally well done, and the reveal of the killers is impressively disturbing. And that's something that becomes harder and harder to do these days, revealing a killer or killers that are memorable and not standard cliche's. Without giving too much away, I liked where they went with the identity of them here. It was different, in a good way.

Haunt can be seen on Shudder, and is available to rent on Amazon Prime.
Posted by robotGEEK at 3:06 PM