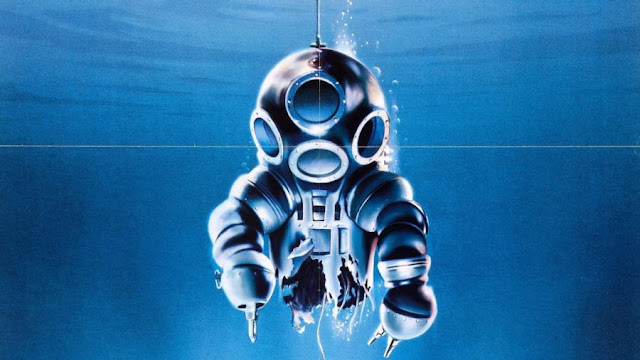 Despite Being The Weakest In The Famous "Underwater Creature Features" Of 1989, Sean S. Cunningham's More Horror-Centric Entry Is A B-Movie Blast

If you're as old as I am, then you remember that 1989 was a big year for underwater Creature Features with Deep Star Six, Leviathan and The Abyss all being released the same year, with The Abyss being the only one to actually make money. But even then, The Abyss wasn't considered a hit compared to Cameron's previous films, only making 20 million on top of it's budget worldwide. When you factor in marketing, that's not much of a gain overall. Yet, all three films would find life on home video after the fact, and all would eventually go on to claim a cult status.

Produced and directed by original Friday the 13th creator, writer and director Sean S. Cunningham (The New Kids), Deep Star Six was a big surprise for me if I'm being completely honest. Maybe because I went in with exceedingly low expectations since this isn't a film a lot of people refer to when compared to the other more well known films released this same year, but I had a lot of fun with it. And why shouldn't I? The cast was ace with a solid who's who of character actors, and Cunningham, for his part, shot this thing surprisingly well considering it all takes place within the confines of an underwater station. Visually and aesthetically, the film looked better than I was expecting, and if I had anything to gripe about, it would just be the low-budget-looking model work. Still, these scenes add a bit of charm to the vibe overall, and while it's not all that surprising that it's most often compared to Leviathan, having only a quarter of that films budget, yet still looking the same (save for the low-key effects), Deep Star Six, despite its' B-Movie aura, delivers the goods far more than you'd expect.

As far as the casting goes, there's not a weak link in the bunch. I guess the lead would be Greg Evigan of the series My Three Dads, who's actually quite good in this, but Nancy Everhard (The Punisher 1989) is easily the standout. Miguel Ferrer (Robocop), Nia Peeples (Walker: Texas Ranger), Matt McCoy (Abominable), Elya Baskin (2010: The Year We Make Contact), and Cindy Picket (Ferris Bueller's Day Off, Sleepwalkers) round out the cast to full effect.

I think for me personally, I just found it entertaining in that it never really slows down, often relying on the suspense of not actually seeing the large creature for the most part, instead taking the Jaws approach. And for a film with a considerably smaller budget than it's other 2 brothers, you'd honestly never know it if it wasn't for the less than impressive modelwork. Still, I quite enjoyed what they contributed to the experience overall, and that just may be largely in part to Cunningham's strong and effect ability to get the most out of a budget as a producer. A producer, I might add, who's credits range from his underrated 80's teen thriller The New Kids, to horror classics such as Friday the 13th, House, House II and The Horror Show.

Deep Star Six, for all it has going for it, won't blow you away, but it's a film that has only gotten better and stronger with age, and while it may not be held up there with Leviathan or The Abyss, it's every bit as entertaining, just in a much more "genre-specific" way. While it's primarily an underwater thriller, Cunningham's experience in the horror genre is imprinted all over this thing. It's a B-Movie blast that deserves another look.
Posted by robotGEEK at 6:48 PM