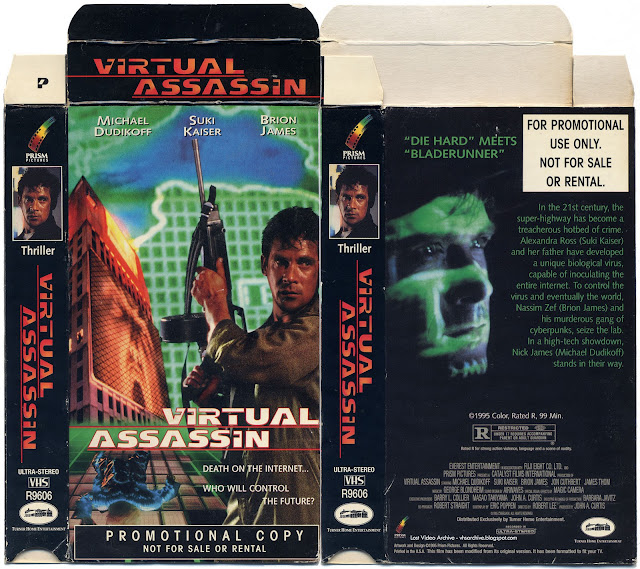 By this point, Dudikoff's once promising career as an action star had started to wane, and while he continued to work regularly, the quality of his films had diminished greatly from the once popular Cannon days. Still, he worked tirelessly and while most of his films were forgettable DTV fare, there are a few gems scattered throughout that decade. This is one of them.

Dudikoff plays an ex police officer turned janitor for a high tech science facility. When a band of terrorists, led by the legendary Brion James (no introduction needed!!!), infiltrates the lab so that they can insert a deadly computer virus that will give him world domination, it's up to Nick James (Dudikoff), who reluctantly heeds the call.

Released in 1995, Virtual Assassin AKA Cyberjack (a much more fitting title) is basically Die Hard in a science lab, and it's great. I think for me the most surprising element is in just how well its made all around. Directed by Robert Lee, making his directorial debut after a decade as Assistant Director of over a dozen films both big and small, Lee surprisingly gives the film a professional sheen that I was not expecting. Yea sure you see the limited budget splattered all over the screen, but even so, his camerawork and compositions were something to admire. And believe me, that's not something I'm looking for in these types of films, so noticing that almost immediately was a pleasant surprise.

While the majority of the film takes place inside a large high tech computer/science lab set in the future, there are a few moments in the first and final act that implement impressive model work, and these are the moments that honestly surprised me the most. Of course they look like models, but it's in how they were implemented into the scenes and how they were shot that were most impressive. I actually wished there were more model-work sequences because they looked so great! But that's just me.

Brion James is hands-down the highlight here, sporting bleached blond blown-out hair and goatee, an oversized black leather jacket and looking like he's from an early 90's Glam Metal band, he does what he does best and that's make every scene he's in memorable. Lucky for us, he's the main villain here, giving him ample screen time to play over the top in the best possible way.

If I had any gripes, it would only be 2 things. First, they give the characters of Nick James (Dudikoff) and the villain a Boston-type accent that doesn't always work, especially in the case of Nassim (Brion James), where it seems to come and go. The second would be the title of which it's currently available as in the U.S., Virtual Assassin. It gives a sort of misleading idea that some of the film will take place in a virtual world, but there's never a single second that that actually happens. Cyberjack is a much more fitting title. Other than that, there's plenty of action, style and over the top nonsense to deliver the goods.