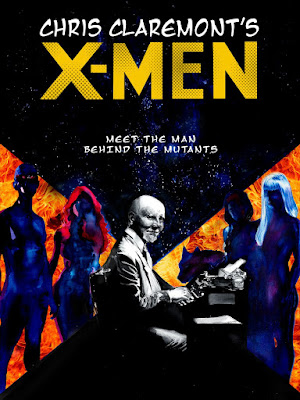 While X-Men wasn't a title I was particularly obsessed about growing up in the 80's and 90's, I knew enough about it to be a casual fan. My main titles were Iron Man, Hulk, Spider-Man and most importantly, Punisher. But I would randomly grab X-Men from time to time, and if I'm being 100% honest, X-Men was the very first comic I ever purchased when I was a kid in the mid to late 80's. The exact year escapes me, but I'm pretty sure it might have been Classic X-Men #20. I remember being at a local convenience store (remember when they sold comics in convenience stores!!) and randomly grabbing that issue of Classic X-Men and immediately being hooked on comics to the point that I became obsessed with them for many, many years.

While X-Men wasn't a personal favorite, and even if you as a casual collector weren't necessarily an X-Men fan, it's hard to not know that Chris Claremont is alone responsible for crafting the X-Men brand into what they are today. Having written that comic for a total of about 16 years, he created so many characters and memorable storylines that ultimately became the X-Men legacy, many of which made it into the big budget feature films of the last 20 years. In short, Chris Claremont is the man who made them what they are today.

How much did he create and invent in that time? You'd be surprised! And it's all laid out splendidly in this engrossing documentary that gives deep insight into literally every year since it's creation by Stan Lee and Jack Kirby in 1963, a comic that wasn't that big of a hit by the way. Claremont is front and center here, but they also interview some former Marvel heavyweights, like former Editor in Chief Jim Shooter (Secret Wars), whom Claremont fought regularly with and honestly comes across as really unlikable.

This excellent documentary is currently available for FREE on Amazon Prime.
Posted by robotGEEK at 3:31 PM