A Case For Terminator 3: A Better Sequel Than Most Give It Credit For 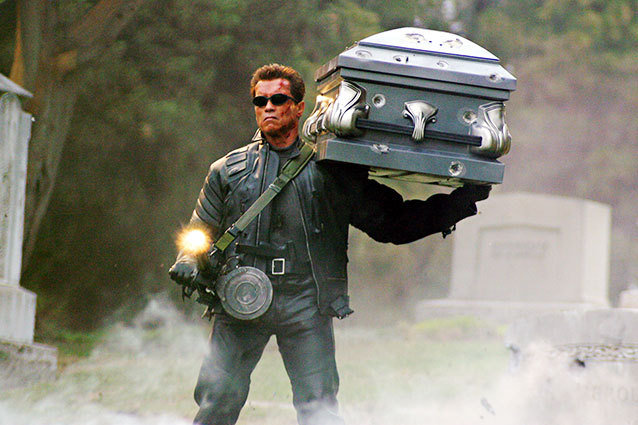 Keep in Mind. Watching This Sequel Requires Being in the Right Frame of Mind

With all the hoopla over the new Terminator film hitting theaters, with most of it negative, I thought I'd take a look at one of the sequels that gets tons of flack. Well, let's face it. All of the sequels after Part 2 get lots of flack, but there's something about this one. For some reason, when people are bitching about the terrible sequels, their go-to is always Salvation and Genisys. As they should. Those films are terrible. For that reason alone, I thought I'd revisit this one since I already owned it, and really have no desire to go see the new one yet. So let's dig in.

Here's the thing, and I know I'm in the minority here, but I actually really enjoyed this a lot. If anything, it's pretty much a big budget B-Movie, much in the same way the first one actually was. Only with that first film, Cameron was such an incredible filmmaker that he made the film look and feel bigger than it actually was. The same thing can't be said about the director of this one, Jonathan Mostow (U-571, Breakdown). And I'm not really sure why that is. I mean, it looks good for the most part, and Mostow had proven himself an accomplished director with the damn near perfect thriller Breakdown. But there's something very defining in the way he shoots this thing. It just can't help but look like a B-Movie, no matter how much money they threw at it. And that's one of the reasons why I enjoy it.

At the time, this was the most expensive independently produced film, almost reaching the $200 million dollar range. But you'd never know that just by watching this. Despite being made a whole 12 years after the landmark and groundbreaking Judgement Day, the effects work here has taken a sharp detour in quality. No matter how many effects sequences they throw at us in this, both big and small, they look cheap compared to any other film in the franchise, which is crazy considering more than a decade had gone by since the previous installment.

But this film is not all CGI effects. Surprisingly, there are just as many practical effects and stunts as there are CGI, and it's in the practical side of the effects that the film really delivers and shines, with Arnold even shelling out a cool million of his own money to pay for that crazy "crane car chase" sequence in the middle of the film. It's a shame that they just didn't try and stick with it in that sense the way the first film did, by keeping most of the effects work practical and small. I feel if they had, it would have been a much better film experience overall, having gone back to basics the way that original first film did, instead of giving us mediocre effects work for a film following one of the greatest sequels ever made.

Bad CGI and strange tone aside, the film has some good things going for it. For starters, Kristanna Loken is a great Terminator. Her dead-cold stare, even when she's on the losing end of a fight, is damn impressive, as is her physical badassery. If there was ever a Terminator in the franchise that was in the same league as Robert Patrick's T-1000, I think she would be it. And there's also the moments where the film tries to infuse some tongue-in-cheek humor that falls embarrassingly flat, coming off as cheesy rather than funny. But again, that's all fitting in with it's unintentional tone.

And despite my criticisms of the film's B-Movie quality, ultimately that actually works in it's favor. If you can't get it to compare to that masterpiece first sequel, then at least going the complete opposite direction is admirable, even if it was ultimately unintentional. And that's what Terminator 3 is; a big budget mess of a film that didn't turn out the way it was originally intended, and once again stalled the franchise for another 6 years. It's hard to say whose at fault; the director, screenwriters, or producers. Maybe all of them? Somehow none of it gelled well together and created this bastard child of a sequel. But it's still a helluva lot of fun, and I'd revisit this one again before I even consider any of the ones that came after.
Posted by robotGEEK at 6:46 PM