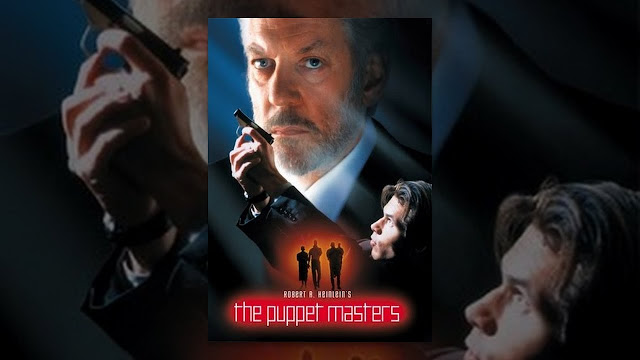 Somehow I never got around to this one before, and I'm not really sure why. I guess it just didn't look all that interesting to me, but my tastes in films tend to change over the years and suddenly I had an urge to finally check this out. And I'm so glad I did, because this was a surprisingly great, effective little sci-fi/thriller.

A race of aliens have invaded a small rural town and taken over human bodies at an alarming rate. Within just a few weeks, they will have completely taken over the planet unless a secret government agency can stop them.

Released in 1994, and starring an actor I'd never heard of, The Puppet Masters succeeds in it's no-frills approach by offering up decent amounts of thrills, action, suspense and just a little bit of horror to give you an overall satisfying experience all wrapped up in a neat little package. And I can't stress enough how surprised I was at how good this was. I suppose I was expecting a mediocre thriller, but instead was treated to a well-crafted science fiction thriller that literally hits the ground running right from the start.

Despite the lead (Eric Thal) being decent, but someone I'd never heard of until now, the large eclectic cast was impressive to say the least, with Keith David, Donald Sutherland, Julie Warner, Will Patton, Yaphet Kotto, and Marshal Bell all turning up in this to great effect, adding a large dose of class to the production. But it's really Sutherland's intense performance of an almost heartless and emotionless boss that carries the film. 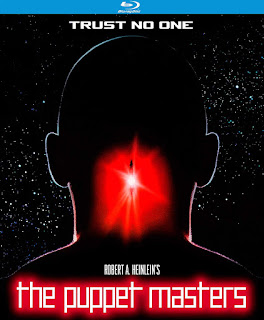 Based on the book by author Robert A. Heinlein, screenwriters David S. Goyer (Blade, Batman Begins, Dark City), Ted Elliott & Terry Rossio (Shrek, Aladdin, Little Monsters, Pirates of the Caribbean), the film doesn't really blow you away with anything particularly clever or groundbreaking, but it does offer ample amounts of tension and thrills consistently, all put together with class by longtime television director Stuart Orme, here marking his one and only big budget theatrical feature. And after seeing this, I'm quite surprised he never got more theatrical gigs, because he did a stellar job here. Nothing too fancy, but sometimes that's just what the project calls for, and he delivers the goods. In fact, this could easily have been a great Made-for-TV film, yet still works great as a big budget feature without losing any of it's quality.

The Puppet Masters was released on Blu Ray last year by Kino Lorber with a bunch of new interviews by the large eclectic cast as well as commentary by director Stuart Orme and editor David Yardley, with an all new scan and impressive picture quality.
Posted by robotGEEK at 4:39 PM