Leaps and Bounds Better Than Most in This Genre, Virtuosity is a True Gem Waiting to be Discovered or Revisited

Released in the crux of the 90's Virtual Reality explosion along films like Strange Days and Johnny Mnemonic, Virtuosity is easily the best film in the bunch, and for good reason. Directed by Brett Leonard (The Lawnmower Man), Virtuosity manages to do something that none of those other films was able to accomplish, and that's make a slick, violent and fun film experience. Honestly, I wasn't expecting to love this as much as I did, because I probably haven't seen it since the good ol' VHS days, but holy shit does this film pack a punch of awesome.

Denzel Washington is looking lean, cut and mean here, while Russell Crowe is basically just an unhinged firecracker, delivering easily his most over the top performance to date. The rest of the cast, including the always badass William Forsythe, is fairly impressive with some notable character actors that all deliver solid work.

But for me, the one thing that kept me invested and the thing that surprised me the most above all else is how damn good the film looked. Personally speaking, a film has to be visually stimulating if I'm going to enjoy it. I know that's not everyone's forte, but I really need to enjoy the visuals just as much as anything else. So you can imagine my shock when I discover that this is by far the most impressive film in Leonard's career as a director. I had just recently revisited his very first film The Dead Pit, and honestly couldn't finish it. It was awful, amateurish and I was bored to tears. But I know directors grow so when I remembered that he had done this sci-fi/action/thriller from the 90's, I took the leap and snagged the blu ray for cheap. And I'm so glad I did. I can guarantee that this will be a film I will revisit often throughout the years. 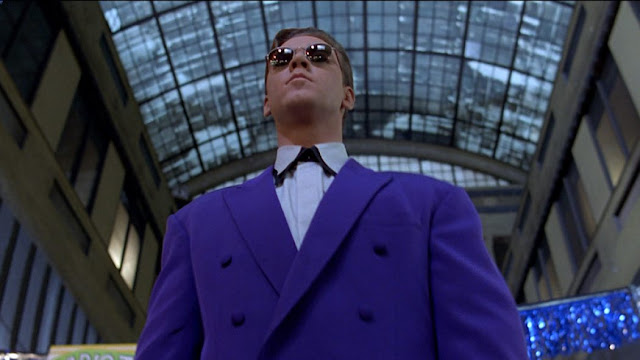 You're probably guessing that since it is a virtual reality flick, that the effects work is laughably dated. It is. Yet thankfully the VR scenes are few and far between as the film mainly takes place in the real world as our VR killer is transported here where he is let loose to wreck havoc on an unsuspecting city. Sure it's a neverending list of cliche's and truly odd moments (like the nightclub sequence?) that are never explained, but that's part of the fun!

The 90's seem to have been director Brett Leonard's strongest period with films like The Lawnmower Man (1992), Hideaway (1995) and this, all hitting theaters, while everything else he's done has gone straight to video or TV. And I've seen some of these other films and they're pretty terrible. It's so strange to me that he can start in the low-budget world, deliver some strong theatrical gems, and then go right back to the DTV market and deliver some fairly forgettable films. As I was blown away by Virtuosity, I'm sitting there thinking "I can't believe this is the same guy who made The Dead Pit and Highlander: The Source.

I feel like Virtuosity has become a forgotten gem today, which is really sad because it's a very entertaining and well made flick all around. While it was a bomb upon it's theatrical release, it's only gotten better with time. The film is hilariously dated, but that only adds to it's charm and makes it a hoot to watch. You can pick up the blu ray with an awful cover for cheap. I can tell you the transfer is crisp and clean, but there are no extras.
Posted by robotGEEK at 11:03 AM