Pulse is a film that I always remember seeing the cover of pretty much throughout my entire life, but never gave a second thought to actually watching it. Not really sure why either. It just never really seemed like anything I'd be into, but boy was I so wrong on that one.


Released in 1988, Pulse (not to be confused with the 3 other films with the same name) is a horror/thriller about an electrical entity that moves from house to house and causes havoc and murder. When the young son of a businessman arrives to spend time with his dad, who's divorced from his mom and now living with a new wife, the son starts to experience strange things inside the house, and begins to plan a way to make all of the adults in his life, namely his busy father, believe him.

I have to say, I honestly wasn't expecting much from this one. Probably just because nobody "ever" discusses it. But ultimately I ended up loving it. So much in fact that I immediately purchased the recently released Blu Ray for a cheap price, because I know it's going to be one of those films I will revisit frequently in the next few years. Yes, it's that good. 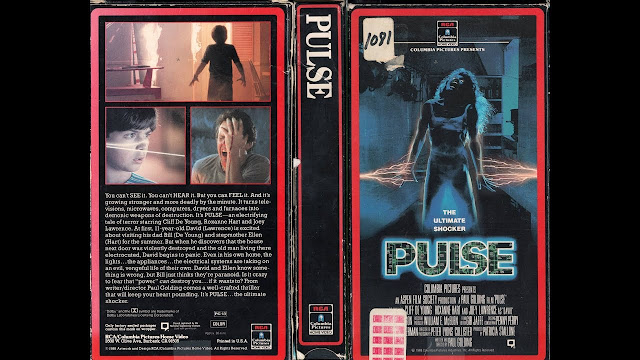 I think for me, while the story is a bit silly, it's got so much going for it in general that makes it stand out among the countless horror/thrillers of the 80's. For starters, writer/director Paul Golding, marking his one and only directing effort here, makes it all fun. There's an energy here that is hard to describe. On the surface, it's a fairly simple story, but he somehow manages to do it in a way that keeps you glued to the tv screen. And for a guy who hadn't directed a feature film before, he infuses the film with so much great visual eye candy that even if you don't find the story all that plausible or even scary, there's no denying the film is a treat to look at. There are even moments when he uses some really impressive micro camera work that takes the viewer inside electrical appliances as the "pulse" surge of electricity is wrecking havoc on the house and anything electrical. I mean, these sequences were really damn impressive and it blows my mind how effectively he was able to accomplish them.

All in all Pulse is a great and highly underrated 80's gem. Having finally seen it, I'm shocked it doesn't get more love. It manages to effectively display a sort of retro feel and charm throughout that is so hard to get right, while also making it a legitimately effective little horror/thriller with standout performances and some great visual effects work.

Pulse is currently streaming free on Amazon Prime, but you can also pick up the Blu Ray for roughly $5-$8 from any number of online retailers.
Posted by robotGEEK at 12:16 PM