That's right! Robert Harmon's 80's cult classic is finally getting the HD treatment for the very first time courtesy of the German company Nameless Media. No details to announce as of yet, but just the fact that they were finally able to do this after decades of people begging literally every other company, is such fantastic news. I'm not entirely sure why it's taken this long but word is that the owner of the rights always demanded too much money. I don't know if that's true or not, but that's what the consensus is, so the fact that these guys were finally able to get the ball rolling is music to our ears. With no list of extra's or specifics to announce yet, it has been confirmed that it will be getting a brand new 2K transfer and will come with 5 different covers to choose from (pictured above). 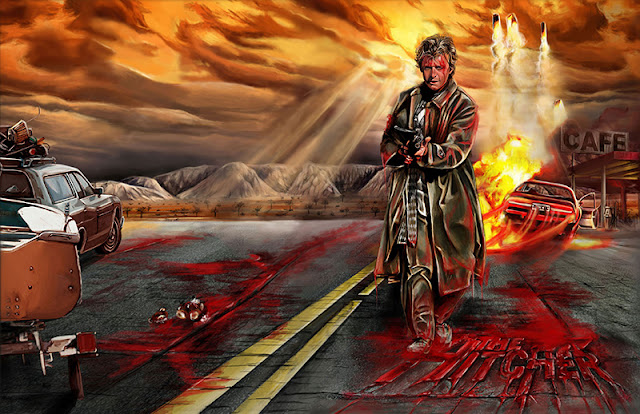 The Hitcher on Blu Ray has easily been the Holy Grail of HD releases for so many of us. Released here in the U.S. on VHS, Laserdisc and only one single time on DVD, it's a film that is so visually impressive, with so many of this film's camerawork and cinematography just being flat out stunning, much in the same way Russell Mulcahy's Razorback was, which in itself is another underrated cult classic thriller, that it never got the truly special release it deserved was so frustrating to so many of us. The one DVD release we got was in widescreen (thankfully!), but it was a pretty sub-par transfer, and it had zero extras. So you can imagine why fans of this classic such as myself have been waiting many, many years for an upgrade. The fact that it's finally happening almost seems unreal, especially considering more well-known companies such as Arrow, Shout! Factory, MVD and Kino Lorber weren't able to secure a deal. Stay tuned.....
Posted by robotGEEK at 11:15 AM