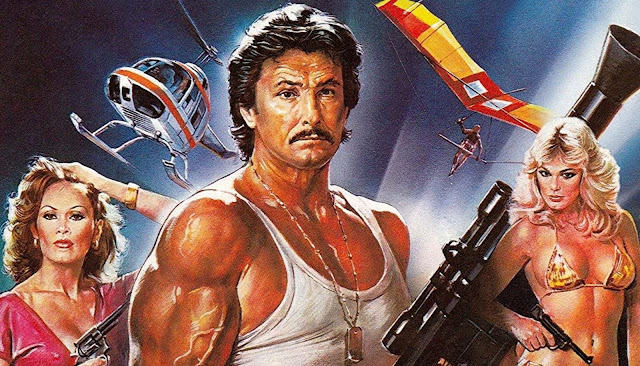 While Andy Sidaris films are generally hit or miss, when he hits, he hits big time. And there's no better example than his legendary Hard Ticket to Hawaii, arguably one of the best "So Bad, It's Good" movies out there, and a helluva great time in the action/trash department. Seriously, if you've never seen it, gather some buddies, crack open some beer and enjoy the ride. Trust me, you'll thank me.

Seven tells the story of 7 hitmen, recruited by ex-CIA agent Drew Savano (William Smith), who in turn was hired by the FBI, to take out 7 gangsters in Hawaii who have taken over Hawaii's drug trade. 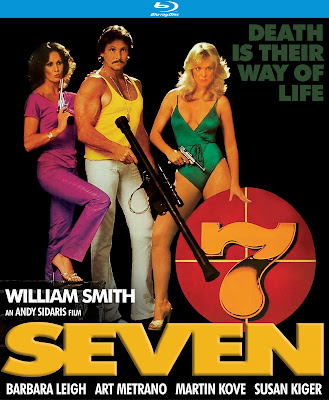 Seven was such a blast of 70's nostalgia thrown smack in your face like a sucker-punch. While the story tends to get a little too convoluted for it's own good, it always seems to get back on track either through random nudity, or an unintentionally hilarious action sequence. And really, these are the things we come to expect from Andy Sidaris, and he does not disappoint. In fact, I'd go so far as to say this is easily one of his best films, and the fact that it's rarely ever mentioned just blows my mind.

Released in 1979, this would mark Sidaris' second full length feature, after 1973's Stacey. Not sure why it took 6 years to do another film, but in the interim, he did a little bit of televsion work. Of course, Seven would pave the way for the type of film Sidaris would become famous for in the 80's, and it's pretty much everything you've come to expect from the trash auteur, only with a strong 70's vibe.

William Smith has made a name for himself in a string of bad guy roles in the 80's and 90's, so it was a bit odd to see him here as a not necessarily the bad guy, but not really a good guy wither. I must say though, his hair and outfits should star in their own movie, because they deserve it. And if this was from '79, and he was already looking old, how old was he then if he continued to play tough guy bad guys throughout the 80's?

While the large and eclectic cast of nearly every race, ethnicity and stereotype is plentiful here, the real standout for us had to be Playboy model Susan Lynn Kiger, here as part of the team of 7 hitmen, and um hitwomen, to take down the 7 drug bosses. Curvy, sexy, tall and oh so incredibly gorgeous, every second she was on screen (often either nude or something incredibly skimpy), made us audibly yell out "damn!" every single time. It's a shame she only appeared in a handful of films before calling it quits in '82. Thankfully there are plenty of pictorials to browse through of her on the internet. 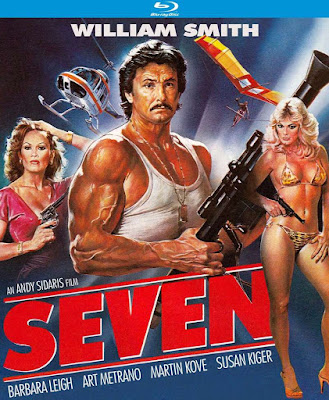 Andy Sidaris fills Seven with so much ridiculous situations, over the top scenerio's, action sequences, nudity, and truly bizarre dialogue that it's damn near impossible not to have a blast with this. While it's true that there might be a tad too much exposition in here, it's thankfully done in a way that makes it easy to take in and get through until you get to the good stuff, of which there is plenty.

Without wanting to give too much away here, I'll just leave it at this and implore you to get out and grab this treasure of a film. If you're a fan of Andy Sidaris in his prime, or just a fan of Guns, Boobs & Bombs-style films in general, you won't want to miss this. It's a blast!

You can purchase Seven directly from the Kino Lorber website HERE, or from any number of online retailers for under $20. It comes with a bunch of trailers, reversible cover art, and a few audio commentaries.
Posted by robotGEEK at 2:03 PM