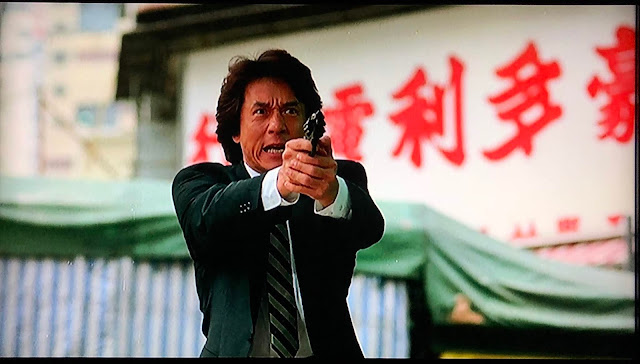 This May Very Well be One of Jackie Chan's Best, Most Underrated Films

Like everyone else, I grew up on a healthy dose of Jackie Chan films in the 80's. While they were pretty hard to find back then, I still somehow managed to come across a few here and there. But when Rumble in the Bronx exploded in the U.S. in 1995, distributors took the opportunity to cash in on his popularity and started releasing a lot of his older and most recent films for fresh fans. That's how I discovered a lot of his previous films for the most part, because this was before the internet was in every household and eBay hadn't yet been the go-to place for films like this. Anyway, I'm getting off track.

Released in 1993, Crime Story is a hard-edged action packed detective action/thriller about a cop named Eddie Chan, who tries to uncover the truth behind a recent kidnapping and ransom of a high profile businessman. Soon Chan learns that there may be more to the kidnapping that he initially thought.

I have to say, I fucking loved Crime Story. I didn't watch any trailers and didn't read anything going in beforehand, essentially going in cold, not knowing what type of film to expect, and that might have been a blessing because I was constantly surprised at every turn and literally blown away by it's sheer force. Make no mistake, Crime Story is a powerhouse of a film in every regard. Add to that the fact that when you consider that most of Chan's films carry some sort of comedy, the fact that this one didn't have any of that, and was a straightforward action/thriller was a nice and welcome surprise. 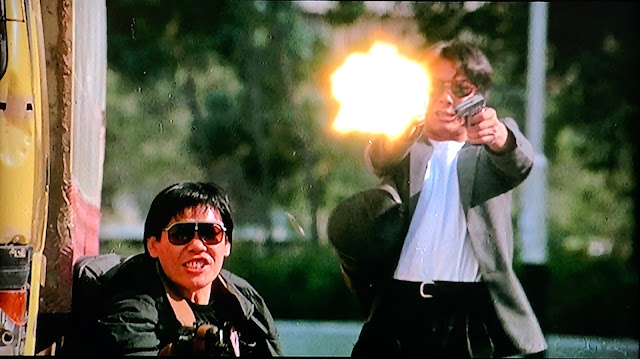 Part 90's John Woo shoot-'em-up, and part detective thriller, this film was a constant stream of surprises for me. The action and stunts were insanely balletic, much in the way John Woo's best films are orchestrated, and the intensity that builds up to a fever pitch in the second half is nothing short of exilerating. This may very well be one of my favorite Jackie Chan films now, and much like his insanely underrated The Protector (1985), Crime Story is a shockingly overlooked gem.

But I get it. I think a lot of his fans prefer his action/comedies rather than these hard-boiled action/thrillers because honestly, they're a lot of fun. I mean, I enjoy them too, because they really are a blast for the most part. Hell, he even segued that into a bustling career in Hollywood 3 years later with his incredibly popular Rush Hour franchise. Yet, if I were to be honest, I think I love his serious action films the most, and though I've only seen The Protector and now Crime Story in this genre, I'm excited to dig into his Police Story franchise next.

It's a shame his more serious films don't get the same amount of love his comedies do, because he's quite a good serious actor. Just check out his recent and excellent U.S. film The Foreigner if you need a reminder. I'm sure his natural tendencies lean towards comedy, but man he can sure deliver a helluva great serious performance when he needs to, and Crime Story see's him kicking a whole lot of ass and taking names in the quest for justice. 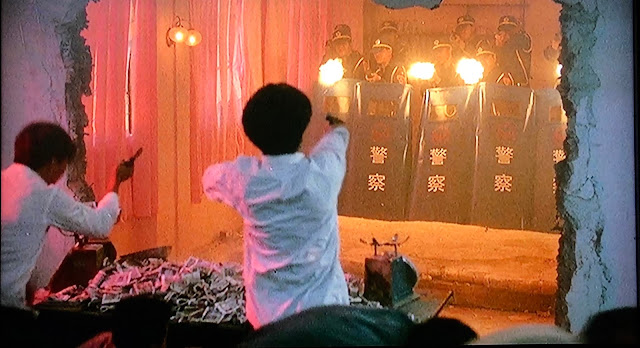 One of the things that surprised me that there was very little martial arts in here. I'm not complaining though, because it left room for some seriously badass car chases, shootouts and explosions. The pyrotechnics in this this is insane! But when the martial arts does make an appearance, it's goddamn brutal as fuck and makes the fight scenes that are here all the more special.

Crime Story is easily one of my new favorite Jackie Chan films now, and despite it's lack of having a badass reputation, it's wholly deserving of one. Full of suspense, crazy action sequences, and some of the best fight scenes of his career, Crime Story is begging to be discovered. 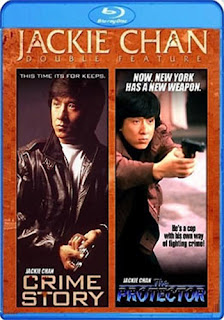 I'm sure there are numerous releases of this film on virtually every format, but my money is on the Shout! Factory 2-pk Blu Ray, which you can pick up for relatively cheap. Not only do you get this excellent film, but you also get my favorite Chan film The Protector, the shockingly overlooked James Glickenhaus (The Exterminator, Shakedown) classic.

On top of that you also get a healthy dose of extras for both films (including the Jackie Chan cut of The Protector as a special feature), and most importantly, they're in glorious HD. You really can't beat a deal like that for the money, so what are you waiting for??

You can pick up this badass Double Bill at a great price on Amazon HERE.
Posted by robotGEEK at 12:43 PM