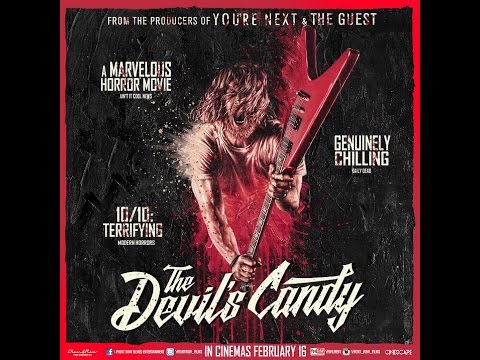 This was a film I had been hearing rumblings about from film festivals. The fact that it was a follow-up from The Loved Ones director got me really excited, because Loved Ones was quite excellent and a total surprise. It seemed to take a while for it to finally get a release here in the states, but once it hit On Demand a few weeks back, we made it our Saturday night movie. Let's dig in.

Minor Spoilers Ahead:
The Devil's Candy won't win anyone over who went in expecting something as good as The Loved Ones. In fact, as a film, it's pretty simple and surprisingly unimaginative. The best thing it has going for it is it's deeply rooted heavy metal soundtrack, which I must admit was quite excellent. On a visual level, it's a great looking film. Writer/Director Sean Byrne takes his time setting up shots, and it shows. The film may be bathed in darkness, but it's a beauty to look at. I think the thing I struggled with is that it's just not very interesting. It's about Jesse Hellman (Ethan Embry), a struggling artist who moves into a new farmhouse with his family, only to discover that it's haunted. Soon the evil entity possesses him, in turn producing some of his best art he's ever made. This entity also possesses the house's former tenant, a mentally unstable man who abides by it's evil intentions and kills because the house, or voices rather, tells him to, who soon becomes obsessed with Jesse's young daughter Zooey. It all comes across rather simply, and try as it might, it just doesn't pack the same visceral punch as Byrne's previous film. 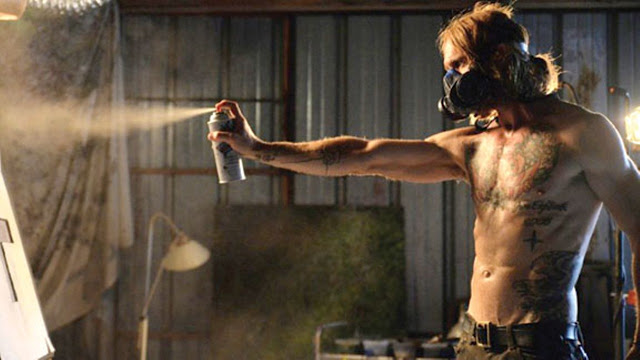 I think the first thing that really kinda floored me is that it starred Ethan Embry, someone I hadn't seen in anything in nearly 20 years until I saw him as a regular in Grace & Frankie on Netflix. I just assumed he had dropped out of acting before then, but it seems he kept fairly busy in a number of projects all these years. I had no idea. But then to see him starring as a heavy metal artist with long hair, covered in tattoos, and ripped with a muscular physique kind of blew my mind. He does a fine job in the role, and I think for the casual moviegoer, you probably wouldn't even recognize him, which says a lot about his immersion into the role. He sells it and he sells it well.

While not a bad film, it wasn't very memorable or engaging either. When it was over, we kind of just looked at each other and said "eh, it was alright". And then the reality starts to sink in that this really could have been much, much better. Performances are strong, the film looks great (a rarity in horror these days), and the metal soundtrack is killer, but as a whole, the film is a bit too conventional and bland for a film that really could have stood to stand out from pack, much in the way the ultra-satisfying We Are Still Here did. There's never really any explanation to anything either, and while that's not terribly important, it is when the film plays out in a very standard way. It would be different if it was really clever and engaging, which would in turn deter you from asking those questions, but The Devils Candy is not, and so while you sit there through it's slow pace you can't help but ask a number of questions that never get answered, and it becomes a bit frustrating. I won't mention those specific questions here, because I don't want to plant that seed in your head.

All in all, not a bad way to spend an hour and a half of your time. I like a lot of things about the direction writer/director Sean Byrne took with this one, but the things he "didn't" do are the ones we walked away with more than anything. It's not a very memorable film, but certainly worth a watch. And if you grew up on 80's and 90's metal, then you'll at least love the soundtrack.

How to see it:
As of this posting, it's only available to stream on a number of sites like Vudu, YouTube, Amazon and Google Play, typically for $6.99. I haven't heard yet of any form of physical release on DVD or Blu Ray, but I'm sure that's soon to come.