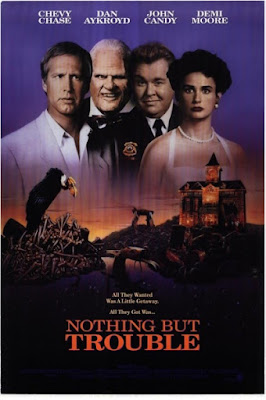 The one thing I’ll always remember about this film is that one of my best friends back when this first came out loved it so much, and I hated it. He loved it because it was so weird, and I hated it for that very same reason. He had/has a tendency to lean more towards the weird and bizarre, while I usually stuck to mainstream. So it’s no surprise his favorite filmmaker is David Lynch, and mine would be someone more along the lines of Peter Hyams, Paul Verhoeven or Craig R. Baxley. I haven’t seen this since it first hit home video, and at the time, I just couldn’t understand how or why anyone could love or enjoy this film. But if there’s one thing I’ve learned these past few years, it’s that my tastes have changed vicariously, so maybe I’d actually enjoy it this time around. When I scored this on DVD for a mere 25 cents at a pawn shop, I figured it was a sign. So let’s dig in.

I can tell you that 25 years haven’t made it any less bizarre, but I didn’t hate it as much as I did back then. I enjoyed it to a very slight degree, because it was fairly insane from start to finish, but I can’t say it’s something I enjoyed for the right reasons or that I’ll ever feel the need to revisit this.

Written/Directed/Starring Dan Aykroyd, with a story by his brother Peter, Nothing But Trouble is kind of a surreal decent into backwoods hell in some alternate universe rather than a comedy, which is how it’s been marketed. It’s not funny, not in the slightest, and any attempt at even a dry humor falls flat, but what it lacks in humor it more than makes up for in being darkly imaginative and slightly teetering on absurd dark humor. It’s an uncomfortable surreal nightmare that doesn’t quite know what kind of film it’s trying to be, so I can only imagine the surprise, and maybe even disgust, of the casual moviegoer who actually paid good money to see this in a theater because it starred Chevy Chase, Dan Aykroyd, John Candy Demi Moore.

I actually don’t know the real reason, but I can only guess the reason these high profile actors agreed to participate in this was as a favor to Aykroyd. I can’t imagine these actors actually reading the script and thinking it was something they’d voluntarily want to be a part of. Even my movie companion, who loves weird movies (the weirder the better) found this to be too weird in a conventional way. She couldn’t understand so many of the creative decisions made in front of and behind the camera/scenes and struggled with finding any kind of enjoyment in it since she couldn’t even tell what type of film it was supposed to be. In fact, just based on the cover art alone, she thought it was a western, and she didn’t believe me when I told her it was set in the present tense via the early 90’s. 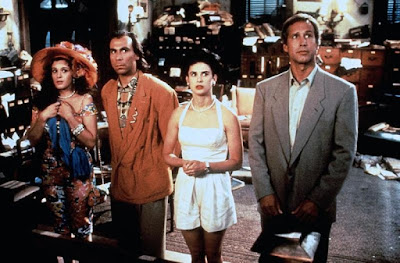 I have to give credit to Dan Aykroyd though. The guy, somehow, managed to make one of the weirdest films I’ve ever seen inside the Hollywood system, complete with all the bells and whistles. As far as production goes, it’s a bit impressive. At least in that department (sets and set design), it doesn’t disappoint. You’re eyes are constantly trying to take in and make sense of the Mad Max/Post Apocalyptic-style surroundings located within an old courthouse and it’s backyard. It's highly surreal in a very unconventional way.You don't know whether to be impressed, or wonder just what the hell it is you're watching.


I guess I can understand it's appeal to some people. It's weird as shit and never tries to be anything but. I'm sure the studio was worried and not sure how to exactly market it, so I suppose comedy was the safer bet, especially with this particular cast. But it's not a comedy. nor is it a horror film. It has particular elements that relate to both of those genre's, but never enough or done correctly to fall into either of those categories. Dark comedy or black comedy might be the way to go. In any case, it's not a highlight of Aykroyd's career either as a writer or director, and I'm not surprised that he never directed anything again after this.

Posted by robotGEEK at 9:20 AM