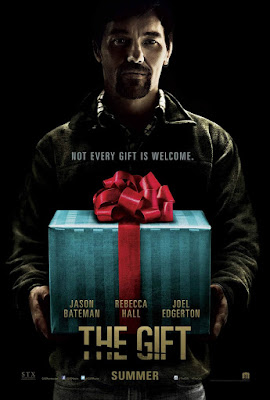 I can't remember the last time a big budget studio thriller had so many people talking about it's big twist ending. So much so that the marketing department took a page out of the Sixth Sense hoopla and marketed The Gift around it's big surprise ending. And still as of this writing, while the film has been out a few weeks already and unfortunately hasn't done great box office business, the trailers still revolve the entire premise around this big surprise twist ending.

For me, it all started with a review I read from Birth. Movies. Death. before this hit theaters. Essentially, the film reviewer said that the trailers just don't do the film justice, and that "The Gift is not fucking around". From that moment, I was sold. But then they touched on it's huge "twist" ending, which got me even more intrigued. Since then pretty much every single review I read, and every trailer I saw soon after really pushed for the big ending. This past week I took advantage of my local theater's $5 Tuesday deal and gave this a shot, hoping for the best, hoping this film would kick my ass, like the strong word of mouth kept implying.

The Gift is undoubtedly one of the best made, and most solid thrillers I can remember seeing in a theater. It's good. Really good. And really solid. However, it didn't kick my ass, and it's big twist ending wasn't anything I was expecting it to be, thus sort of leaving me a bit unsatisfied. I'm sure I'm not alone on this. I don't really know what I was expecting, but with all the rave reviews, and all the talk about not ruining the ending for anyone who hasn't seen it yet, I was expecting something big. And ultimately, The Gift's ending didn't quite seem like a big twist at all, but more a satisfying conclusion to a rock solid thriller. To me, it felt like that's how these films should end, with a big conclusion, and in that respect, The Gift delivered ten fold. But did the ending blow me away? No, so you shouldn't expect it to either.

When Simon (Jason Bateman) and Robyn (Rebecca Hall) move to a new city, a seemingly random run-in with an old acquaintance by the name of Gordo (Joel Edgerton), slowly turns into a nightmare, and soon, Simon's past comes back to haunt him.

Actor/writer/director/producer Joel Edgerton has crafted a really sleek and tension filled thriller. I'm not sure how he was able to pull this off, considering there were no hints at his talents behind the camera in the past. Primarily an actor from Australia, he's made a short or two, but that's it. The Gift would mark his first big studio effort, and not only that, he decided to wear so many hats his first time out, and each one works splendidly well. Surprisingly, Edgerton shows a strong sense of character buildup, and offers up some really nice visual eye candy to boot. You get the sense that he took his time setting up shots, looking for the right angles, and getting the most out of every single frame. And then there are the little touches that most people probably wouldn't notice. For instance, there's a scene where the main character Simon (Jason Bateman) is showing his new office off to his wife during a work party. As the camera pans around the room my OCD immediately picked up on the crooked picture frame in the background, and it was driving me crazy. And I thought "how could anyone in the set design miss that?!". But then as Simon walks past it, he fixes it. So it was deliberate, and was a tool meant to show how structured  Simon is, which speaks volumes about his character later in the film. And that's one of the things I loved about The Gift. There are so many little things done deliberately that might not seem like a big deal when you first see it, but when you look back on them, actually turn out to mean something.

Everyone turns out a knockout performance in this. While it was strange seeing Bateman in serious mode, his turn really wasn't all that different from the asshole character he's become known for, just a slight and more serious variation of that. Edgerton was fantastic. Creepy would be an understatement. Outside of his performance, Edgerton did his homework, and did an outstanding job structuring an air-tight thriller using all the basic elements we've come to expect from the genre, and utilizing them to their full effect, resulting in a truly satisfying cinematic experience.

The Gift reminds me of the kind of thriller we used to get back in the 80's and 90's. You'd think that the genre would still be strong today, but surprisingly, it's not. So when a film like The Gift comes around, out of nowhere, and delivers the way a film like this should, it's a breath of fresh air.
Posted by robotGEEK at 3:42 PM