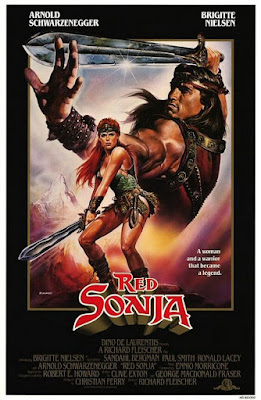 Somehow this film has always escaped me. Never mind the fact that it stars one of my idols, Arnold Schwarzenegger. And never mind the fact that in the 80's when I was a kid and going into my teenage years, Schwarzenegger was probably the biggest action star in my eyes. I don't know, something about this film never got my attention. Also, I've never met anyone who's ever said a good thing about it. That right there says a lot. But as I'm currently getting through Schwarzenegger's autobiography, I learned a few things about this production that instantly got me interested enough to want to see it, such as his affair with Brigitte Nielson, or how mega producer Dino De Laurentice suckered him into doing a cameo, only to trick him into co-starring in the entire film. I'm sure most of that is well known by now, but hearing it from Arnie's own mouth was better. So I went in with some expectations. I knew it was going to be bad, that's just the consensus. Hell, Schwarzenegger himself calls this film awful! But, how bad is what I wanted to find out. Would it be campy, yet entertaining bad, such as films like Flash Gordon, Swamp Thing and Masters of the Universe? Because if that's the case, I'm sure to love it. Or would it just be bad all around, where nothing is really salvageable in this mess?

Oh it's bad alright, but in an incredibly dull kind of way. Which is a damn crying shame because believe it or not, this film has a lot going for it, and I often found myself questioning how a movie can look so good, yet be so damn boring. And that's really Red Sonja's one and only biggest fail. It's dull as shit.

But that's just coming from an entertainment level, because believe it or not, Red Sonja has a lot of other things down really well. For instance, it's a stunner to look at. I'm not sure if it's all on director Richard Fleischer, or if his DP had a lot to do with it, but whatever the case may be, the visuals in here are near breathtaking with it's use of extreme sweeping widescreen shots, and just getting an amazing sense of geography in every scene.

Another aspect to Red Sonja's positive attributes is the stunning set and costume design. Really, it's fucking impressive. It's almost as if they took the flashy campiness of Flash Gordon, and redesigned it to fit the medieval era. And you know what? It works. Nearly every aspect of the design from the sets, to the costumes, to the construction of the temples all have a dark, yet surreal campiness to them. It's really hard to put into words, but it's something that's immediately noticeable, and combined with the excellent camerawork, make for a really satisfying visual experience altogether. Now, if only the film wasn't so damn dull. 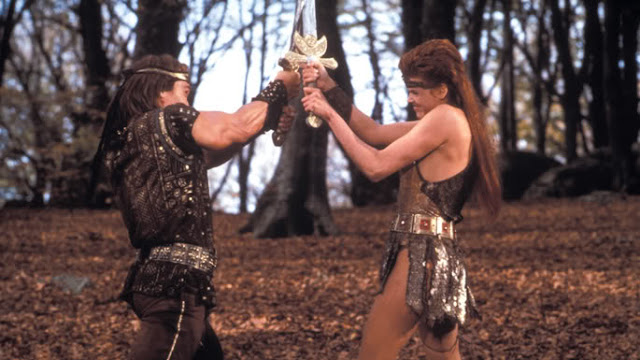 Seriously, while Brigitte Nielson is cringe-worthy awful in a good half of her dialogue delivery, and Schwarzenegger almost seems to be hamming it up way more than usual, those unusually "bad" moments could easily be forgiven had this film been at least fun, or exciting, or just plain weird that you just can't look away because you can't believe what you're seeing. Kind of like your experience watching the amazing Never Too Young To Die. But Red Sonja possess none of those elements. I felt like I kept waiting and waiting for anything interesting to happen the entire time. And honestly, with the exception of a sequence where Arnie fights a living dragon statue under water, and a scene that had a bunch of golden skeletons randomly hanging from the ceiling which actually looked radically cool, there's not a single thing in here that stood out that will leave a lasting impression.

What's really frustrating is that all the elements are here for something great from both ends of the spectrum. On one end, the film looks amazing, and has an incredible sense of style that you clearly wouldn't expect from a film like this, especially given it's reputation, but it lacks any fun or excitement. Had the film had laughably bad dialogue, at least we would have had an entertainingly bad movie on our hands. Sadly we don't. And on the other end, if as much care had been put into the script as was put into the production design, we could have probably had one of the best swords & sandal films to come out of the 80's. With some clever dialogue, a better lead, and some genuine fun and thrills implemented into the story, this film really could have stood out. But ultimately, Red Sonja doesn't fall into either of these camps. All in all, it's a well made bore.
Posted by robotGEEK at 4:04 PM