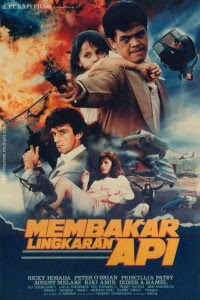 If Arizal's Final Score was him at his most outrageous, then Double Crosser is him at his most tame. Again, much like with American Hunter, I had high expectations going in, only to realize rather quickly that while this is indeed a fun and well made martial arts film, it displays none of the insanity of his cult classics. If anything, it's pretty much his most straight-forward film, of the ones I've seen anyway. And there's nothing wrong with that really, especially if you know this going in.

Double Crosser reteams Arizal with the ever enjoyable Peter O'Brian (The Stabilizer) in another paint-by-numbers tale of double crosses and revenge. Same story we've seen countless times before; guy's daughter gets kidnapped and it's up to her ex-cop father to save her. And while the film displays a mile-a-minute ferocity in terms of action, it's all rather tame. There's nothing in here that will blow your mind, or make you wonder if the stunt guy actually lived after that, unlike Arizal's earlier films Final Score and The Stabilizer. One thing I did find quite amusing is that this has some of the slowest car chases I've ever seen on film. Hilarious. And why does every single car chase end with a car flying through the air for no apparent reason?

But Double Crosser is not a total loss. I mean, if you're looking for a standard martial arts flick, you surely won't be disappointed, because that's all this is. It's fast and furious, with a fight breaking out nearly every 5 minutes, with the occasional super slow car chase thrown in for good measure. And as is the standard for all these films, the dubbing is awful, yet highly enjoyable.

Peter O'Brian is fucking fantastic, and does not dissappoint. I still don't know why he never made it bigger in the industry. He definitely displays a special type of charisma, even though every line of dialouge out of his mouth is horribly dubbed, but that's also what makes it hilariously entertaining. Why was his career cut so short? Was it by choice? Did he retire after only a handful of films, or were the jobs just not being offered? I don't know if we'll ever know, but I'm glad we at least have these few gems.
Posted by robotGEEK at 3:20 PM