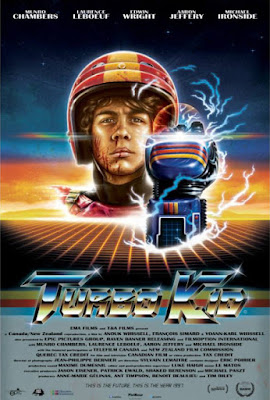 The term "throwback" has been used a lot lately, generally when describing someone's attempt at replicating an action or horror film of the 80's more than anything. Sometimes they're successful, and sometimes they're not. But people keep trying, and when it's done correctly, it's quite an entertaining experience. While I have yet to see one of these throwback's that do it 100% correctly, like not using CGI for the effects, not using the shaky-cam style of filmmaking, and not hiring models for the roles, there are examples that come have come really close, like recent films such as It Follows, The Guest, Starry Eyes, We Are Still Here, and the one that kind of got it all started, Hobo with a Shotgun.

When the Turbo Kid trailer first hit, it literally to come out of nowhere, and seemed just what us die-hard retro gorehounds were looking for. Really, it's got everything we could really want in a throwback homage to 80's action films. Post Apocalyptic Future: CHECK. Over the top gore and violence: CHECK. Cult Film Icon: CHECK. Action: CHECK. Synth Score: CHECK. Practical Effects: CHECK. Yes, it's all here and it's fucking badass.

Set in the post apocalyptic future of 1997, water is scarce, and our hero is a comic book loving teenager who has a penchant for collecting random 80's artifacts. When he stumbles upon a power suit straight out of his comic books, he uses his new-found power to rescue his new friend from the hands of a ruthless overlord.

There is just so much to love about Turbo Kid. It's a fun, engaging, highly spirited and ultra violent homage to post apocalyptic films that ran rampant in the 80's. So much care has been taken to capture the look, feel, and retro vibe of this particular kind of film, and yet, the filmmakers also seem to go through great pains taking everything a step further. There is so much nostalgia drenched into nearly every single frame that it's almost an overload to the senses. Of course, you really had to have grown up in the 80's to appreciate all the sight gags and gimmicks, but even if you didn't, it's all retro enough for you to know how cool and hip these things are.

One of the best things this film has going for it, is that you never expect it to be as violent as it ultimately is. Seriously. When the violence, action, fights, and battles roll in, they will blow your mind. When Turbo Kid finally became available on VOD last week, I immediately rented it, and filled my living room with a dozen friends; friends who love and appreciate these kinds of films. Every single one of us were consistently blown away with every sequence of violence, as each one demonstrated a new kill that none of us had ever seen before. Imagine a room filled with a dozen adults constantly screaming "Oh!!", "Oh Shit!!", and "Whoa that's fucking awesome!". Yea, that's what it was like and it was indeed awesome.

Turbo Kid originally spawned as a short that was submitted to the ABC's of Death producers. Soon after an Indigogo campaign was launched to fund a full length feature film and the rest is history. Written/directed/Co-starring the triple threat duo known as RKSS (Francois Simard, Anouk Wissell, and Yoann-Karl Whissell), Turbo Kid oozes style and substance out of every pore. The film is stunningly shot, offering up some striking visuals of the desolate landscape. What I found interesting was that even though there were 3 different directors, you'd never know it. It's all consistent without any one of them having a drastically different style or approach than the other two. This is made all the more impressive when the practical effects work come into play. These moments are genius, impressive, hilarious, much gorier than you expect them to be, and the meat of the film.

While there is a lot to admire and revel in with Turbo Kid, there was one thing that kept it being 100% totally awesome for me, and that was that the film kept shifting from fast to slow repeatedly, never maintaining a consistent pace. I know why they did it. One thing Turbo Kid has a lot of is heart. And for a lot of people that's a bonus, but for me, all these moments that slowed down to a crawl always took me out of the experience because when the film wasn't working so hard to make us care for the characters, it was easily one of the most impressive pieces of Badass Cinema I have come across in recent years. But you know, it's really a small complaint, if you would even call it a complaint. I guess if there was anything I'd be willing to change, it would be that. But even then, it wasn't too much of a distraction for me, and I'm sure it won't be for most others as I seemed to be in the minority on that within my group.

Currently you can rent or purchase Turbo Kid digitally on VIMEO and iTunes. You can also buy a DVD, Blu Ray or VHS through their Indigogo campaign, but be prepared to spend some a large chunk of change on these items as they're not cheap. As of this posting, I haven't heard anything about a planned large scale legit DVD or Blu Ray release here in the US, but I hope it's soon, because I'd love to own a physical copy of this. There will, however, be a DVD/Blu release in the UK on Oct. 5th, so if you have a region free player, then you're in luck!
Posted by robotGEEK at 2:17 PM