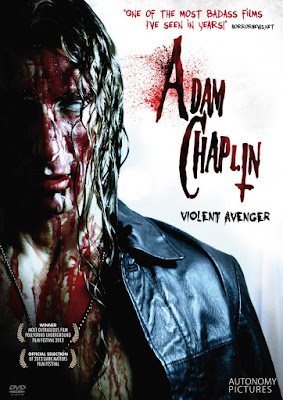 Somehow this film came upon my radar, and what's rather surprising to me as that while it seems right up my alley, I'd actually never heard of it before. So I did some digging and learned that it's a 2011 Italian gorefest written/directed/starring/shot/scored by a huge hulking guy by the name of Emanuele De Santi. I'm serious, this dude is ripped and quite intimidating. But anyway, I then started looking up comments and reviews all over the net and quickly learned this film has quite the following. I can't remember coming across a negative review, with most of them having nothing but praise for what was constantly referred to one of the goriest films they'd ever seen. So yea, I'm stoked! I track down a region free blu ray, invite a bunch of friends over, and prepare to take in the blood-soaked carnage.

With a very short run time of less than an hour and a half, when this was finally over, the vote was pretty unanimous among the group; Adam Chaplin was terrible, odd, and painstakingly dull. Here's the thing. I get what De Santi was trying to do here, and I love gore. I love to see shit that messes with you. I love how, much like the French, Italian gore just goes all out. But the painful truth with Adam Chaplin is that De Santi is a terrible director. I found his style of directing nauseatingly awful. There's no style, no substance. He shoots the entire film using closeups. I've never seen that before, and it's fucking annoying. It constantly feels like you're in a closed closet, even though half of the film takes place outside. There's no geography, no sense of where you are or how big anything really is. It's overly hammy (acting), so over the top (gore) that it all comes off as rather cartoony. So much so that we were all kind of turned off by it. It just came across as silly. Too bad too, because Adam Chaplin had potential.

The effects work here, while insanely over-the-top, is really impressive. I mean, there is some crazy shit in here. Heads, limbs, body parts, all getting cut off or crushed beyond all recognition, and while it is indeed cartoony and silly, the gore content is just badass enough that you could easily overlook the rest of the films many failings. The major problem with that is that there just isn't "enough" gore in here, and not nearly the amount you're expecting. Before the first credit rolls up in the beginning, you're treated to a scene of two guys getting brutally killed. Awesome. But then you have to wait a good 30 minutes for another gory scene, and as per usual, all the main stuff is saved for the end. But by that point you've already seen most of the same stuff in the first two acts of the film, so except for a cool impaling, there's nothing else in the end that will blow you away. And honestly, having to sit through an entire hour of some of the most boring and downright confusing exposition imaginable, coupled with some of the worst directing I've ever seen in a horror film, it's just too much. The end doesn't make up for the piss-poor quality we have to endure for an entire hour.

From what I can tell, it's set in the future, and Adam is either dead or indestructible, with the help of an evil parasite thing that comes out of his back and tells him what to do. He's seeking revenge for the death of his wife, or something like that.

Like I said before, had this film just been filled with nonstop insane kills and gore, then the rest of the film's many, many failings could have been overlooked, but sadly, there's just too much annoying shit that will drive you insane by the end. It's too confusing, it's too slow, it's too dull, too much unnecessary use of green screen, annoying handheld messy camerawork, 99.9% of the film oddly shot in closeup shots, and some seriously hammy overacting. Even at a short running time, it still feels too long because of how boring it all is. I'm not even sure what genre this would technically fall under, because it's definitely not a horror film. A few online posts I found about it referred to it as a horror version of Fist of the North Star, but that's not really accurate either. To me, it's a weird experiment in filmmaking that just doesn't work, and it's too cartoony for it's own good.
Posted by robotGEEK at 10:56 AM