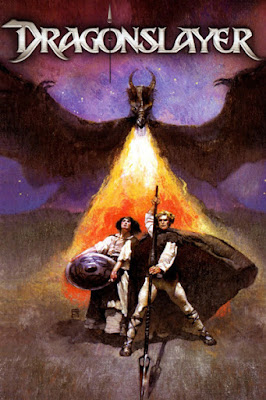 Sometimes when I look through my DVD collection, I end up surprised when I find something I didn't even know I had, which in this case would be Dragonslayer. I honestly don't remember buying it. But I do remember always liking it, and always being impressed at how amazing it looked, even for an early 80's fantasy film. Funny thing is that this film has randomly been popping up in my head throughout the years, so when I was looking for something to see with my 12 year old son, I thought now was as good a time as any to revisit this, and to see if it was as awesome as I remember it being.

The answer is yes. Oh hell yes! If anything, Dragonslayer will make you angry at today's overuse of CGI, as it demonstrates the best of optical effects and old fashioned practical effects. Even if the film isn't your cup of tea, there's no denying it's stunning display of practical effects work. Miniatures, in-camera optical effects, blue screen, stop motion, and life-size replica's of dragon parts - mainly the head, arms and tail - will literally blow your mind. When I threw this on, none of us who were watching it could believe how amazing every single effects shot was, even though they look dated (not in a bad way, more like a nostalgic way), they still come off far more convincing than anything a computer can conjure up these days. It's pretty sad when you think about that.

Amazing effects work aside, Dragonslayer plays out pretty straightforward. When a wizard hired to slay a dragon who's been killing virgins of a nearby village unexpectedly dies, his apprentice (Peter MacNicol) takes it upon himself to finish the job. Really, that's it, but that's fine, because with it's simplified story, we're able to take in everything else, like the stunning geography, the incredible effects, and it's impressive overall visual aesthetic courtesy of director Mathew Robbins (* batteries not included). While Dragonslayer doesn't add anything new to the genre, it sure is a gorgeous looking film. You're constantly in awe of how stunning everything looks, from the production design, to it's huge scope and vast landscapes; everything looks epic for a small film made in 1981. 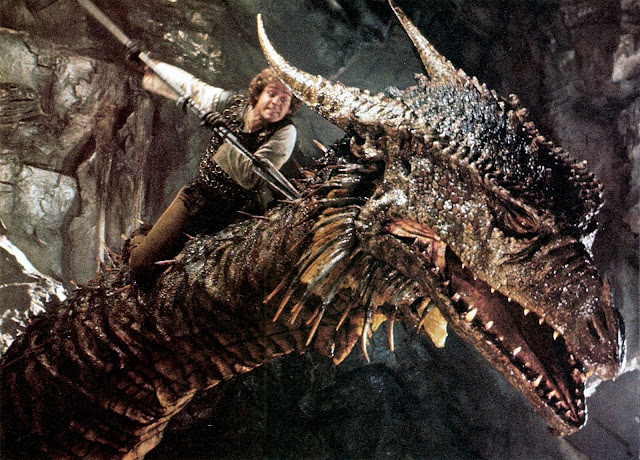 I've heard reports that MacNicol is actually emberrassed by this film and won't list it on his resume, and I honestly can't understand why. Maybe because he's playing kind of a kid? I don't know, but he has nothing to be ashamed about this. I hadn't seen this in decades....literally, and when I threw this on again recently, I was still shocked at how AWESOME this film is. From beginning to end, there's never a dull moment, emitting a constant charm that you rarely see in films anymore.

I'm surprised that director Mathew Robbins never really hit it big after this. In fact, to date, he's only got 7 directing credits to his name going all the way back to 1978 in a variety of genre's. Yet it's with Dragonslayer where he really shines. His camera work is nothing short of stunning, offering a genuine talent for fantasy filmmaking. His aesthetic, which could easily be described as ordinary by any average set of human eyes, is far more impressive when you take notice. After this he had 2 other cult hits with The Legend of Billie Jean and *batteries not included, both of which I haven't seen in ages, but fantasy seems to be the genre he was made for. Too bad he didn't revisit it again.

Easily one of the best dragon films ever made, it blows my mind that this doesn't quite get the reputation it deserves. It really is a genius piece of practical effects filmmaking at it's best. If you've never seen it, or haven't seen it in years, I highly recommend seeing it again ASAP. It's good. No, it's fucking great!
Posted by robotGEEK at 3:22 PM