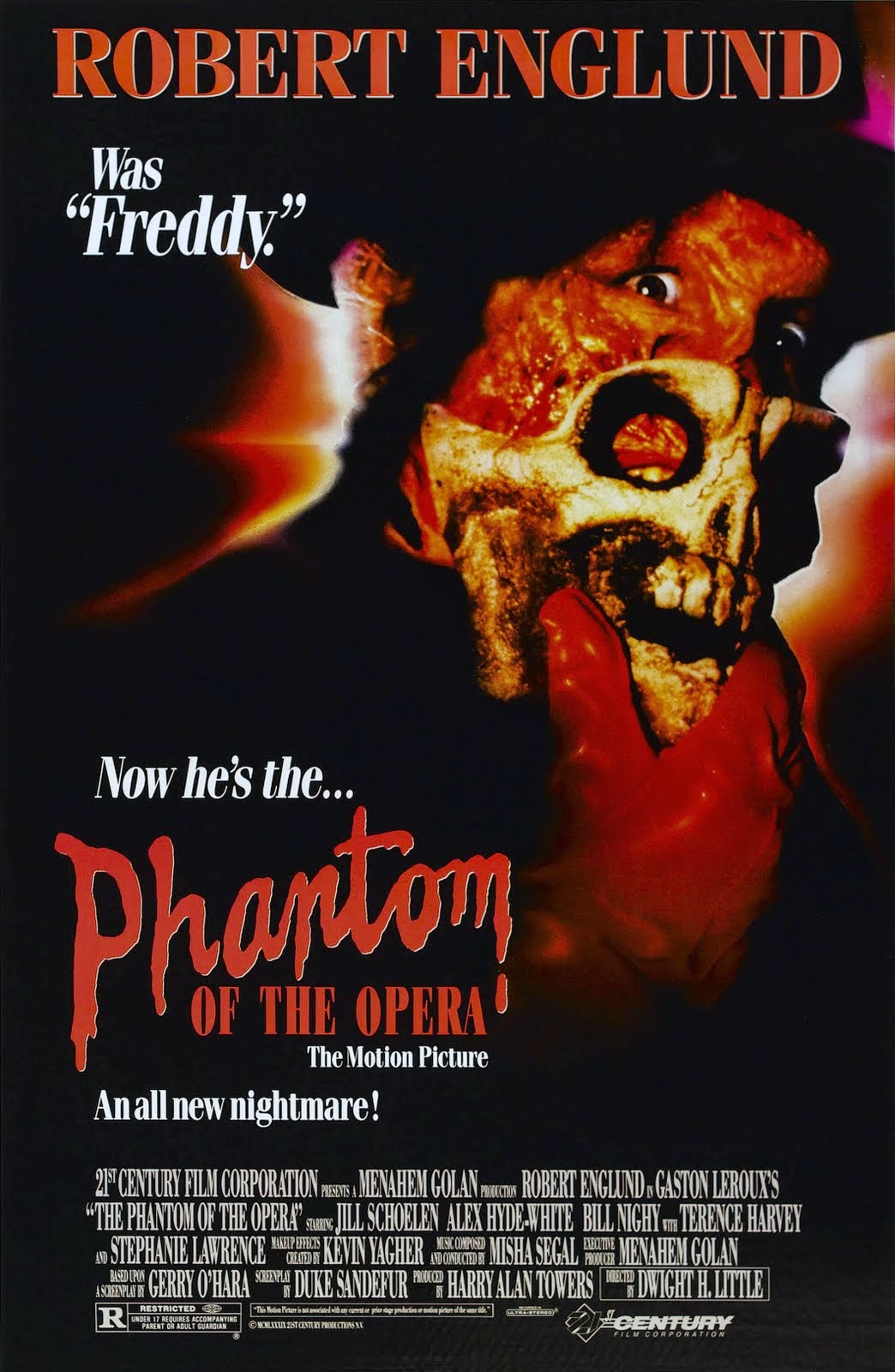 I figured since I had just seen Brian De Palma's Phantom of the Paradise and not being all that impressed, I'd take the opportunity to revisit an old 80's take on the Phantom storyline; something I'd been wanting to do for a while now. I really don't remember much about this, other than it starred Robert Englund in the title role of the Phantom, and that it was directed by Dwight H. Little, who directed my favorite Steven Seagal flick with Marked for Death, but who also did Halloween 4, which I really wasn't a big fan of. He is also responsible for directing Brandon Lee's Rapid Fire, which again I always felt should have been better than it was. So right off the bat this could be either good or bad, depending on which Dwight H. Little we get.

If I were to be completely honest, while this version had a few things going for it, I didn't really feel it was all that great. I don't know. I'm just getting the feeling that Little just doesn't handle the horror genre very well. In fact, I'm realizing that while I hold Marked for Death in the highest regard in terms of martial arts action cinema, it very well might have been a fluke, because nothing he's done since has left any kind of lasting impression on me. Phantom of the Opera is no different. While Robert Englund was inspired casting, he almost seems too hammy for the role. His line delivery, though unintentional I'm sure, is so theatrical that the only way to describe it is hammy. Maybe that's what he was going for, but it's just too much at times and you wonder how much, if any, of it was on purpose.

Englund has a very particular look to him, and so when the scenes involve him applying prosthetics and makeup to look more like a normal man, he comes off looking more like an old lady, which is kind of funny. I know I can't be the only one who thought that while watching this. So rather than having him look more like a normal man amongst the crowd, he looks oddly distracting. So in retrospect, I guess I feel the makeup department missed the ball on that one. Where they could have done some pretty amazing things with practical makeup in this latest Opera iteration, they went with more of a subdued look, which I'm sure threw a lot of people off considering this was supposed to be a full-on horror take on the material.

Produced by Menahem Golan (total surprise to me), of Cannon Films fame, after the collapse of Cannon Films in 1988 and under his new banner 21st Century Films, PotO is a somewhat low-budget affair, but you'd never know it. I've read that people found the sets to look cheap, but I would have to disagree. While not grande by any stretch of the imagination, the film overall looked pretty good. Director Dwight H. Little seemed to be able to grab as much as he could from the sets and production design, making the most of what little there was to work with in terms of sets and budget.

Robert Englund made this the same year he made A Nightmare on Elm Street Part 5, the worst of the Freddy films, and a year after his directorial debut with 976-Evil. So creatively speaking, Englund was on a high streak and quite the busy man. He wasn't bad in this, but strangely miscast. Strange in the sense that you'd think he was the most obvious and ideal choice, but it just somehow doesn't work. The role doesn't fit for his specific brand of acting.

A lot of my gripes could have been easily overlooked with just a few changes. For a horror movie, it's really skimping in the gore department. I know it was severely cut down prior to release by the MPAA, but still. It's a horror film. We need gore. In terms of style, I thought director Little really excelled in some of the more exciting sequences both visually and structure-wise. As odd as it is to say about a horror film, I wish it had some more action to liven the thing up. The few fight sequences and whatnot were far more entertaining than the humdrum slow build that the rest of the film had to offer. Since we didn't have a lot to get excited over in terms of horror, gore and makeup, some cool action sequences would have been something.

Not a great 80's horror film, but not a terrible one either. The film shifts time periods a few times, and I have to admit, I found the sequences that took place in modern day New York circa 1989 far more entertaining than the rest of the film. Maybe they should have stuck with that time period.
Posted by robotGEEK at 12:24 PM