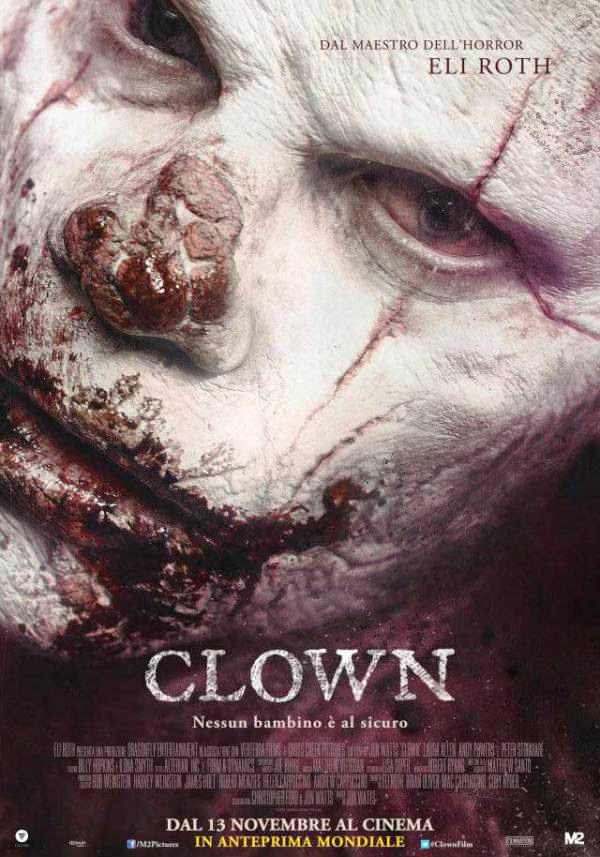 As I sit here fighting the urge to fall asleep because I stayed up way too late last night, my desire to share some thoughts on this film were much stronger. We all know the story of Clown right? What started off as a fake trailer by a very talented newcomer, quickly became a feature film once Eli Roth came across it and was wowed enough to give the guy the chance to make a feature length film based on that little trailer that blew him away. The result is Clown, one of the most original horror films to come out in quite some time, as well as being one of the strongest debut's for a director I've come across in ages.

Clown has been on my radar for a while now, with strong word of mouth building up to practically a boiling point. Somehow people were able to see it everywhere else "except" the U.S., and all of them were positive. A few weeks ago I started seeing a ton of pictures on Facebook from people buying the Blu ray from outside of the U.S., and sharing their newly arrived mail. I was jealous, because still to this day, their is no word of a theatrical or Blu ray release here stateside. And honestly, whoever is behind this is seriously losing out on some big money because if we can't wait to see it when everyone else in the world can, most people will find a way online. That's just how it is. That's the world we live in today.

Kent (Andy Powers), a real estate agent, has a problem. His son's birthday party is any minute and the clown originally hired has cancelled, leaving the parents in a serious bind. The father notices a chest hiding in one of his homes he's currently renovating. When he opens it, he finds a fantastic looking vintage clown suit. He dons the costume and surprises his son as the clown saving the day. But there's a problem. He can't seem to take the costume off. Worse yet, the wig and makeup won't come off either. The costume and makeup seem to be bonding with his body, and before long, both his physical and mental state begin changing.

Clown was such a nice surprise. Everything about this film screams "quality". Best of all, nothing is played for laughs. This is serious horror and its' pretty goddamned great. What I noticed right off the bat is that while it seems that director Jon Watts had never made a full-on horror film before, he does a bang-up job offering up some nice tension, slow build up, and stellar performances from his cast. Another thing I found interesting is that while it wasn't as full-on gory as I was hoping for, the gore that is present is done rather well, and in any case, you don't miss any of it because the film as a whole is so good, you don't need the excessive gore to sell anything.

That is one helluva setup for a film, and through it all, Clown is quite creepy. And for someone who doesn't generally find clowns in general creepy as most others do, I found the whole mythology of clowns in this film quite creepy indeed, and entirely effective. I doubt anyone will look at them the same way again after seeing this.

In a nutshell:
From a practical point of view, there's really nothing about Clown that's spectacular. Yet, it's streamlined approach in nearly every department makes this a standout among the over-saturated new horror films of the last few years. To put it simply, it's effective and pretty damn good.
Posted by robotGEEK at 5:00 PM