Review: Back in Action 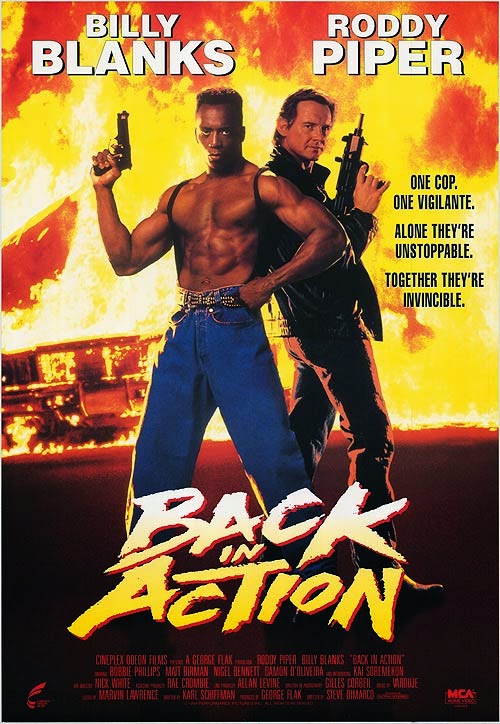 Believe me when I tell you that there's nothing that I love more than a really good and well made low-budget action film. Mind you, I love a lot of everything - I confess. Give me a good sci-fi, an old school kung-fu, an 80's horror, or even a silly comedy and I'm happy. But my first love is and will always be action, and in this day and age where we're hard-pressed for a decent well made non-CGI action film, well when a good one comes along......it's a pretty big deal to me.

When an ex-Green Beret cab driver (Billy Blanks) crosses paths with a tough cop (Roddy Piper) who's job is on the line, he reluctantly teams up with him to rescue his sister, who's run off with a member of the mob and in danger.

I've been aware of this film for quite some time, but for one reason or another I was never able to get my hands on one cheaply. Having never been released officially on DVD, the only other format options for me were VHS and Laserdisc, which is just fine with me since I actually prefer those formats over DVD any day of the week. But I could never find it on VHS cheap. When it comes to Low-Budget DTV flicks, I have a strict limit I set upon myself on how much I'll spend on a "blind-buy". This never fell below it, so I never bought it. The Laserdisc is even harder to come by, and never under $20. But I lucked out recently on a trade I made with a fellow VHS collector on Instagram, and finally Back in Action was physically in my hands. Was it worth the wait?

You bet your ass it was! Back in Action represents the best of what Low-Budget DTV action has to offer. The brilliant casting of Rowdy Roddy Piper and Billy Blanks are only matched by the insane onslaught of neverending fist fights, shootouts, and one-liners. Director Steve DiMarco infuses so much high energy action that I'm shocked to learn that he's not a  full-time action director. As with most of these DTV action directors, they seem to fall into television territory quite easily for some strange reason. Looking at his filmography, it seems he's only slightly dabbled in this genre from time to time while mainly directing episodes of pretty much anything and everything in every genre on tv. Kind of sad really, as he handles the action sequences really well. I'm sure it sounds a little silly to bring up, but you'd be surprised how a good lowbrow film can be hampered by an inexperienced or just plain awful director who doesn't know what he's doing, or films the thing like he doesn't have a care in the world in terms of style. More precisely, nothing but handheld camerawork. I hate that shit. It's lazy, uninteresting and can totally ruin a film for me. But here, thankfully DiMarco doesn't go that route, instead giving the film well shot set pieces that only add to it's already killer vibe.

Never a dull moment, inspired casting, nonstop action and a charm not easily found in these types of films make for a really fun time. It doesn't quite reach the level of awesome that Hologram Man was able to achieve, but it's not far behind. The chemistry between Piper and Blanks is undeniable, and the driving force behind this particular film. I've learned that they also costarred in another DTV flick called Tough & Deadly, which word of mouth suggests is a less successful film than this one is. I guess in this case, lightning doesn't strike twice. But hey, at least we have the badass Back in Action.
Posted by robotGEEK at 2:57 PM