Review: Phantom of the Paradise 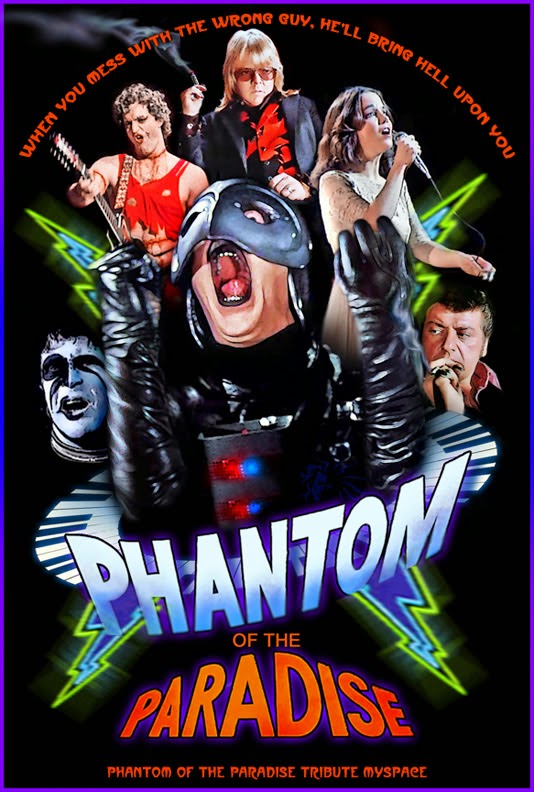 Purely based off of this particular film's huge cult following, I was a little more than excited to finally get a chance to check this out. It pretty much all started when Scream Factory released a very impressive blu ray recently, and the enthusiasm and strong word of mouth have been boiling up to a fever pitch level of excitement. After weeks of debating on doing a "blind buy", I just went ahead and bit the bullet and bought the damn thing on blu ray and screened it for a bunch of friends for movie night recently. One of the things I was most excited about, other than the fact that it was a mid 70's rock n' roll horror musical hybrid directed by Brian De Palma, was that it was a first time watch for all of us. So you can imagine our enthusiasm was pretty high.

I'm sorry to report that for us, Phantom of the Paradise was a severe letdown and nowhere near the level of crazy, fun or awesome that we were expecting. Among it's many issues, we found it to be quite amateurish. I am aware that this was at the beginning of De Palma's feature film career, but I was still shocked at how un-De Palma it all looked and felt. Sometimes that can be a good thing, but in this case, it wasn't. Though he does implore the famous Split-Screen technique he later becomes known for, so there's that.

One of the biggest things that surprised me, and all of us for that matter, was how all the songs in here were generally not very good. For me personally, I was expecting a film full of rock songs, when in reality, rock is but a tiny segment of the film as a whole. The overall concept of the stage production goes through various stages and genre's, until they can figure out what style ends up working best for the musical. So it is not in fact a rock horror musical like I had hoped. And in any case, the songs all seemed quite dull and uninspired. None of them rhyme, and none of them are catchy. There is however, a small segment when the film resembles what we all went in expecting, a full-on rock horror musical, and it was awesome, if only for a brief moment.

Ultimately this left us all a bit confused and let down. It's a crazy film for sure, but I am finding it hard to understand the cult status. I honestly didn't find it to be very good, or entertaining for that matter. Neither of us did. But......to each their own.
Posted by robotGEEK at 2:16 PM