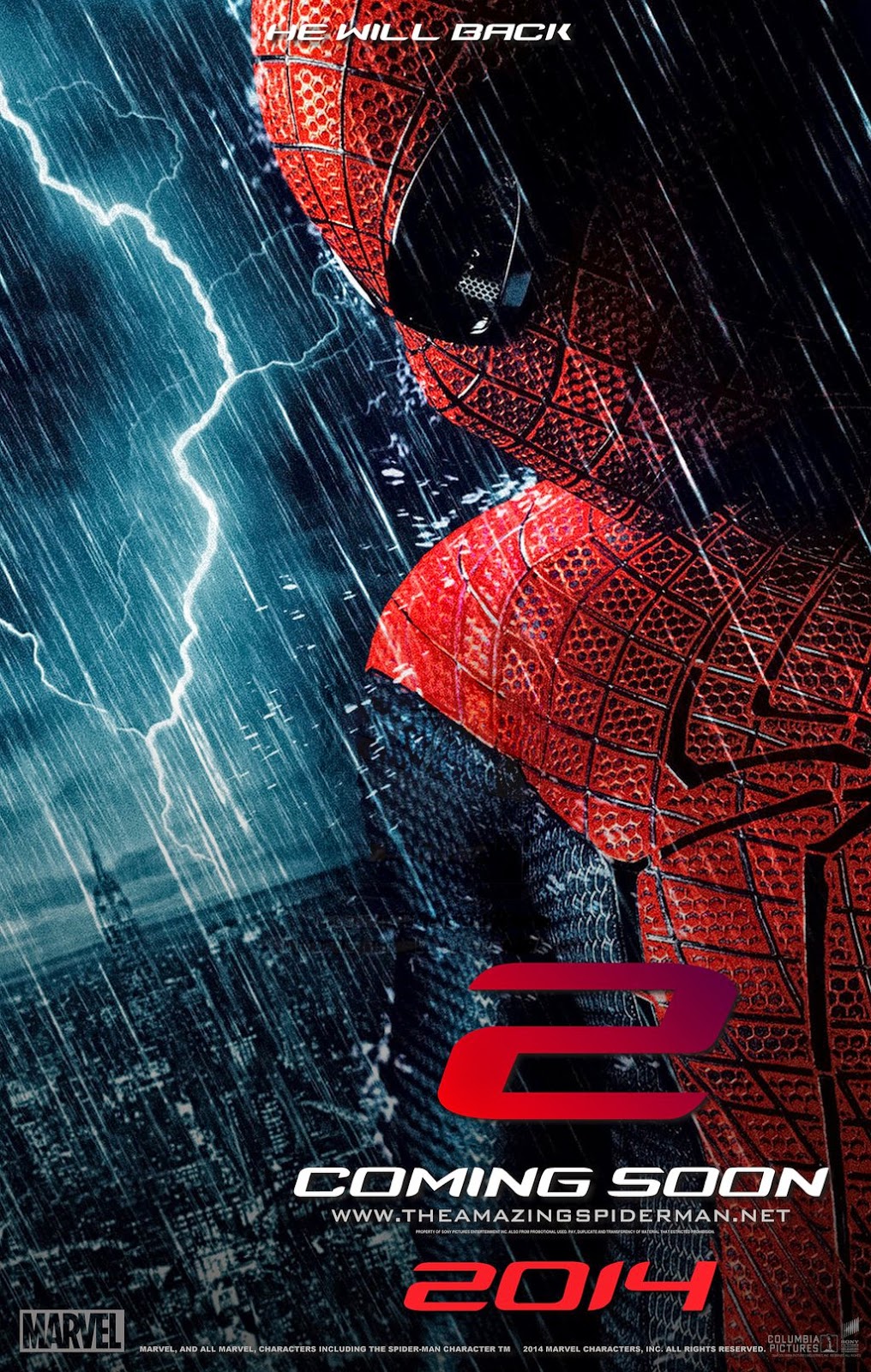 I've never considered the Spider-Man reboot a necessity. Sure Sam Raimi dropped the ball with Part 3 in his franchise, but the first two are extremely well made comic book films in their own right, and I always thought that the reboot was just way too soon. It's literally a remake of the first film from only 10 years before, just made in a much darker tone. And while director Marc Webb did a great job in offering a darker take on the material, I still didn't feel it was all that necessary.

So as the film did considerably well at the box office, despite my objections, it stands to reason that Sony saw a new franchise in their hands and greenlit a sequel immediately. I think Sony possibly thought that by going the Christopher Nolan route, they could re-invent the franchise. And while the trailers for this sequel did hook me in a little more than the first one did, I still was in no rush to go see it. I don't think the rebooted franchise is bad per say, Webb's direction is strong (more so in the first one than the second), and I think Andrew Garfield is an excellent Peter Parker/Spider-Man, but for me, this sequel suffers from the same problems that Sam Raimi's Spider-Man 3 had, too many villains in one film.

Growing up in the 80's, I was a die hard collector of each and every title of Spider-Man; Peter Parker, The Spectacular, The Amazing, Web of. Then when Todd McFarlane rebooted the franchise with his take on the character in 1991 at the height of his popularity, I became even a bigger nerd for that shit. So it's fair to say I know my stuff when it comes to Spider-Man, and so being a guy who grew up with the character, I felt Sam Raimi's take on the material with his 2002 film was stellar in every way. It was like a comic book come to life and I felt (at the time), that it couldn't get any better. Then he unleashed Spider-Man 2 upon us 2 years later and took it a step further - giving us a darker more sinister take, and introducing us to an evil, yet sympathetic villain that does something that most villains rarely do. If you've seen Spider-Man 2, then you know how it ends. Alvin Sargent's deft and intense script laid the groundwork for Raimi's inventive and brilliant camerawork, overshadowing anything that he had done with his previous film in almost every department. Many consider Spider-Man 2 one of the best comic book films ever made, and one of the best sequels ever made, as do I.

Whether we wanted one or not, we got the reboot, which decided to take a more serious and darker approach than Raimi's more comic book infused vibe. As a comic book film, it's a solid effort. The casting was spot on, and director Marc Webb did a good job considering it was his first time handling massive effects work. Their choice to use The Lizard as the first villain was also a nice touch, though I wasn't really a fan of the overuse of CGI. Yes, every single Spidey film is an overabundance of CGI, as it's the only way to do all the shit he does on screen. It just seemed like too many of the sequences with a lot of effects work came off as slightly sub-par and shoddy. But hey, it made money and now we have a sequel. Even as as comic book geek, I had no desire to make the effort to run to the theater to see this, but when it became available at my local Redbox for $1.25, I figured now would be as good as any to give it a shot.

There are a lot of changes this time around. Spidey's suit is slightly different, director Marc Webb returns in the directors chair, but much the way I felt with Jon Favreau's work on Iron Man 2, a lot of this feels rushed. The style he infused in the first film is gone and replaced with a more kinetic freestyle approach that I'm really not a fan of. The principal players return, but we're also introduced to some new characters, like Harry Osborn/Green Goblin, Electro and The Rhino. Overkill? You bet your ass it is. Rhino has a sequence in the beginning of the film for about 5 minutes, and is missing for the entire film until the very last sequence, a full 2 hours later. The character of Electro doesn't come into the picture until an hour in, and Harry Osborn's transformation into The Green Goblin almost seemed like an afterthought to the many writers credited with the screenplay. With his storyline being just a really small fraction of the film overall, I don't understand why they couldn't just focus on one villain. Green Goblin's rise and fall could easily be enough for an entire film, yet it's a minor subplot here. And I suppose Rhino's very brief cameo is intended as a set up for his return as possibly the villain in the next installment, but why bother with Green Goblin?

To the films credit, Jamie Foxx as Max Dillon/Electro and Dane DeHaan's portrayal of Harry Osborn are excellent. I knew they would never go with the look of Electro I grew up with, because lets face it, he just looks a little silly. So their take on his character was interesting, yet effective. I didn't love it, but I didn't hate it either. Green Goblin on the other hand, ugh. Not a fan. But DeHaan's intense performance of a fractured and lost young Harry Osborn is undoubtedly a highlight of the film. Just wasn't digging the look of Green Goblin or the character overall. Also, how does Osborn just know how to use the glider his first time out? You'd think flying around the city on a hands-free glider would take some practice....no?

Structurally, Spider-Man 2 is pretty flawed. The film starts off on such a light note that it fools you into thinking that it's going to be a more light-hearted affair this time around, but then 52 minutes in (almost a full hour), the action starts trickling in and it refocuses itself and resembles more of the type of film you were expecting; a serious darker Spidey film. But it's two hour and fifteen minute runtime is too long, especially when none of the big stuff happens until almost a full hour in. Then the film jumps between storylines; Norman Osborn dealing with his recently deceased father's empire and then unfortunate ouster from the company and simultaneous decent into the disease that will ultimately turn him into The Green Goblin, as well as Max Dillon's transformation into Electro, and hell, why not throw in Peter and Gwen's relationship problems into the mix for good measure. There's so much going on here that you actually forget about the character of Rhino, who disappears for the entire film after a five minute introduction in the beginning. I don't even remember what the point of that whole sequence was to be honest.

Too convoluted, too long, and ultimately, too much of a good thing. While the effects work doesn't come off any better than the last film, and Webb's camerawork is a little less impressive this time around, the performances all around are top notch, that is for certain. It's just all too familiar; too many villains and it can't shake that rushed production feeling, and memories of Iron Man 2 and Spider-Man 3 come flooding back.

Posted by robotGEEK at 4:05 PM