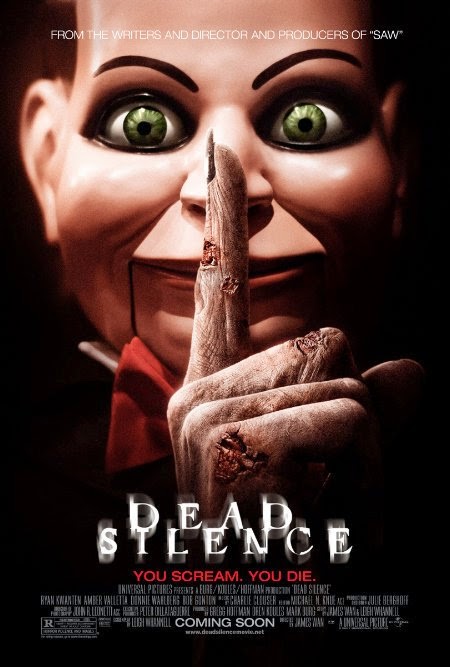 I wouldn't necessarily consider myself a James Wan fan as I've never seen a single Saw film, and wasn't really impressed with Insidious (was I the only one who thought it was just a remake of Poltergeist?), so with that, I never gave the sequel a shot, though I did enjoy The Conjuring; quite a lot actually. So while not actively seeking out James Wan horror films necessarily, Dead Silence recently popped up on Netflix and when we were undecided on what to watch, we both agreed on this one because......well I don't know why exactly.

Jamie and Lisa are a young couple in love when one night they receive a mysterious package with no return address. Inside is a ventriloquist dummy, with no note. Thinking it's a joke, they set it aside and soon strange things start happening. Jamie soon sets out on a quest to find out where it came from and why people are dying around him. Jamie soon uncovers the strange and twisted history of this doll and discovers a connection he never saw coming.

While not offering anything new to the possessed doll genre, Dead Silence was quite the pleasant surprise because what it may lack in originality, it more than makes up for in it's stylish and confidant take on the material. What does that mean exactly? Well, in terms of style, it's one of the best looking horror films I've seen in a while. I know I've said that before, but when I say it, it's because shooting a film with some style is almost like a long lost forgotten art. Too many times directors choose to go the quick and easy route by shooting with hand-held shaky-cam and it pisses me off. So when a horror film comes out where a director actually takes the time to meticulously set up a shot, well then it earns my respect almost immediately, and Dead Silence is a prime example of that. Each shot is flawless in it's execution and while Dead Silence won't exactly scare you, unless you're scared of dolls, in the least it will stimulate your corneas.

Despite the films impressive visual palette, it's pace is another standout. Instead of taking it's time to get you to know the characters, the film instead starts things off right out of the park, with the mysterious delivery at the door of Jamie and Lisa. Not even 15 minutes in and we're introduced to the first death and the film never really slows down from there, which in my opinion, is quite refreshing. We are also introduced to what can only be described as the film's most interesting and entertaining character, Det. Lipton, played by Donnie Wahlberg (yes, "that" Donnie Wahlberg). Man, this guy was fucking great. In fact, when the film was over, my first thought was that I wished there was a whole series of films based on his character alone. You know, like each film he tackles a different case? Wahlberg's take on this character was nothing short of brilliant as he hams it up to 11, offering every single wise-cracking cop cliche he could think of, and it works fantastically. Seeing as this came out 10 years ago, it's safe to say we'll never get those films, but holy shit would they have been great. Wahlberg's Det. Lipton was definitely the highlight of the film.

I'm not going to lie and say this was any sort of masterpiece, because it's not. However, it's a thoroughly entertaining mystery if you can take it for what it is; an extremely beautifully shot film with some brilliant camera work, and a knockout performance by a supporting character that could easily have been the star of his own series of detective films. Wan's direction is crisp and lush, offering his most visually inventive film to date, and the cast is solid, with Wahlberg's Det. Lipton being the standout. A few suspenseful moments and some well designed creepy as hell dolls offer some genuine moments of thrills, but they're few and far between. What you'll probably take away from this more than anything is it's aesthetically pleasing take on the thriller genre, and Wahlberg's showboat performance of a cliche'd detective, but not much else.

Posted by robotGEEK at 7:44 AM