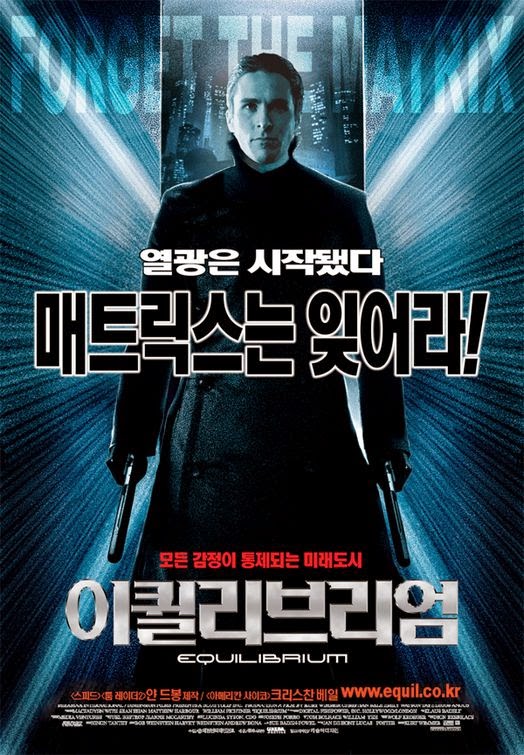 If you follow me, and know my love of action and sci-fi, I'm sure the first thought running in your head is probably "He's never seen this until now?!". Yes, it's true. Why? Because I foolishly thought that it was just a low-budget version of The Matrix. Mind you, I am basing that purely on the poster art and maybe a quick scene I randomly saw somewhere, and nothing more. Wow, what a fool am I.

Equilibrium defied my expectations in more ways than one. First off, it didn't have nearly as much action - or fights for that matter - as I had anticipated, and that's not necessarily a bad thing in this case. Secondly, it has nothing to do with computers, the internet or technology. Rather, it's about a dystopian society where feelings are illegal, which results in the fascist government run by someone named "Father", forcing every single person to take a drug that leaves them emotionless, and unable to feel or think for themselves. Thirdly, I expected this to fall under a "missed opportunity", where it just couldn't live up to the cult status it's amassed over the years, that since it went straight to DVD here in the states, it must look cheap. That couldn't be further from the truth.

In the future, a dystopion society is run by a fascist government who forces them to take a drug that prevents them from feeling. Feeling is illegal in this society, and when one of their top clerics (enforcement officers) begins to stop taking his medication and begins to feel, he starts questioning everything.

If you're not familiar with the name Kurt Wimmer, you most certainly have seen his work from time to time. While mostly a screenwriter, having written films like Salt, Total Recall (remake), Street Kings, Law Abiding Citizen, The Recruit and Sphere, he's also sat in the directors chair three times to date, which is quite frankly shocking when you look at how well this film is put together overall. The first was with One Man's Justice AKA One Tough Bastard, a low-budget actioner starring The Boz that I absolutely loved, and then this film, followed by Ultraviolet in 2006. I have yet to see Ultraviolet, which from what I've heard, doesn't have a very good rep, but just coming off of my recent experience watching One Tough Bastard, it's shocking to me that Wimmer is the same director because Equilibrium has a completely different, more polished and professional aesthetic to it. Every shot is designed, staged and executed with extreme precision, whereas his work in One Tough Bastard didn't really showcase any real visual talent; it was more of what you'd expect from any free for all low-budget DTV action film. But with Equilibrium, I'm left somewhat speechless in how brilliantly it was shot, while simultaneously wondering why he doesn't direct more often.

So much of Equilibrium works effectively well, with a lot of the artistic and technical choices being spot on and down right clever, starting with the action sequences. I had expected the film to be full of insane fights and action, but to my surprise, there really wasn't that much. But what action sequences there are, are just bloody brilliant and flawlessly executed. For the film, Wimmer invented a fight style called Gun-kata, and I don't want to spoil it for you, but it's just fucking awesome. While the film isn't filled to the brim with action, what is here is spectacular. Wimmer knows how to build up tension leading up to a scene, and while that's clearly evident in the film's major sequences, it also translates well in other's. For example, there's a scene where John Preston (Christian Bale) has been summoned to the office of Father's lead officer. On his way Preston assumes the jig is up, and just the way that whole sequence is shot, edited, along with the intense score by Klaus Badelt, is effective to the highest degree in it's presentation.

Equilibrium is a prime example of the right talent coming together for a project to deliver something with lasting effect. Making full use of the film's limited budget, Wimmer emphasizes everything to maximum effect. Every set, prop and location is utilized so well that it's hard believe that this would be considered low-budget. We only assume it is because here in the states, it never made it to the theater, which as you know, signals DTV territory. Yet when you watch it, you'd be hard-pressed to understand why because it doesn't look or feel like a low-budget film in the slightest, and that speaks volumes to the talents of everyone involved in making this film a reality. What they've done here is proven that despite a smaller budget than Hollywood demands, a badass futuristic film can be made and it can look fucking amazing.

Visually on par with anything any other slick sci-fi action film can deliver, Equilibrium benefits from a slightly unusual ensemble cast led by Bale (with an all-too-brief role by Sean Bean), some outstanding action sequences and flat out brilliant camera work and editing, only matched by it's skillful use of Klaus Badelt's riveting score. I was foolish to compare this to The Matrix, because in actuality, it's nothing like that film.  I eat my words and I'm not ashamed to admit that. My good buddy Ingo over in Germany has tried and tried to get me to watch this film, even going so far as to buy me the damn Blu ray and sending it to me. Did I jump on it immediately? No. Why? Because I'm stubborn, and like many others, assumed it was a pale version of the Wachowski's breakout cyberpunk hit from a few years before, and a low-budget one at that. I kept waiting for the right mood to strike, where I was in the right mindset to enjoy a DTV sci-fi flick. Except, a good 5 minutes in it was painfully evident that this was nothing like what I was expecting and once I realized that this was in fact, a badass dystopian action/thriller, I started to feel like shit for not heeding my good friends advice. To Ingo I say sorry, and next time you recommend a film to me, I'm all over it.

I think Kurt Wimmer still has some great stuff to deliver as a director, if Equilibrium and One Tough Bastard is any indication. Ultraviolet may have left a sour taste in most moviegoer's mouths, but everyone has a minor setback. I think if he can take a break from writing remakes, I'd love to see what he can deliver in the directors chair again.