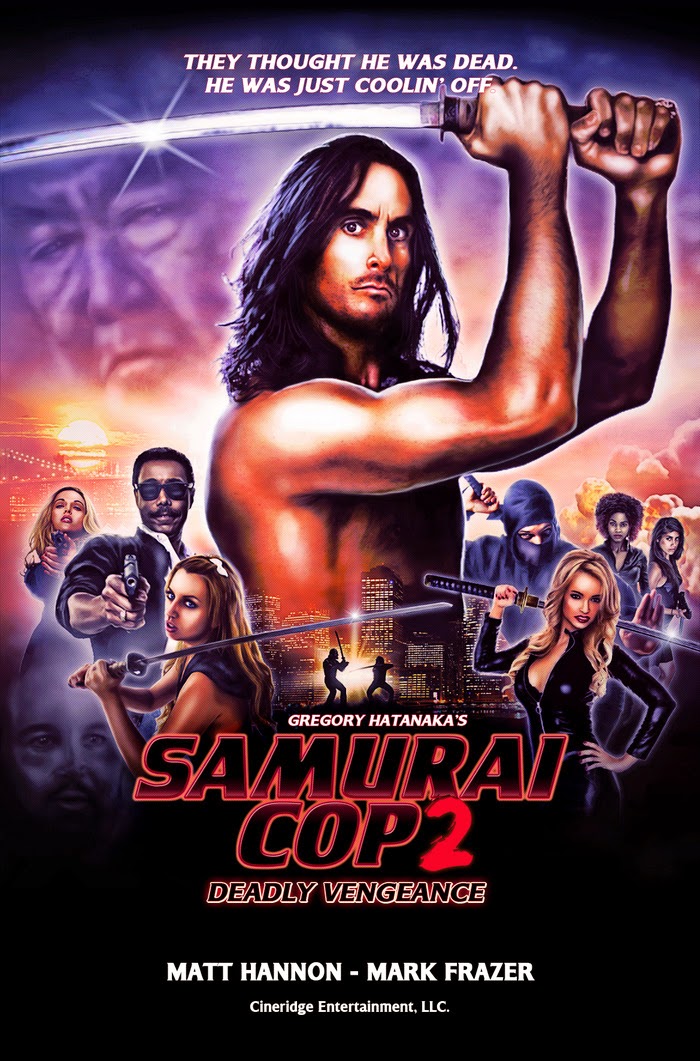 Okay, so I'm not much of a fan of the whole Kickstarter thing in general. While I do believe it does some real good for certain projects, I think it's also been severely abused and overused for anyone wanting to get something done or made without having to find financing on their own. I know that's not always the case, but it happens way too often for even minor projects that could easily be financed or funded if the team behind them just put a little effort into it. Don't get me wrong, I'm not bashing crowd-funding at all, just merely pointing out that the concept has worn itself pretty thin lately.

But every once in a while a project comes along that you just feel NEEDS your support, and as filmgeeks, movie buffs and cinema lovers, we owe it to ourselves to make these dream projects a reality. One of those projects is Samurai Cop 2, a sequel to the hilariously inept and terrible, yet insanely fun and entertaining Samurai Cop from way back in 1991 by low-budget filmmaker Amir Shervan. While the majority of the funding has been secured, they are in need of more to help get the film finished so they can deliver the kind of film that we've all been waiting 25 years for.

While I'm excited about all of this, I'm also a little cautious. For me, I think what made the original film so great was that the original writer/director, Amir Shervan, was just so bad at doing what he loved doing, which is making action films, that regardless of his lack of budget, he just couldn't do anything remotely decent in terms of well.....everything. That's what makes Samurai Cop so great. It's terrible in almost every way, yet so damn funny and entertaining because of it. So to have someone else come in and make a sequel, I'm worried that this new guy might actually know how to put a film together. Sounds weird right? But that was some of the beauty of the original. So with that in mind, if this new film's writer/director does in fact know how to film and/or edit a film decently, I think the only other option would be to just make it so batshit insane that in case it is in fact put together well, it at least will still have the whole "WTF?!" vibe that the original is so famous for. Those are my two cents.

For tons of promotional material, as well as information on how you can help make this a reality, follow the link to it's official Kickstarter page HERE.

Every little bit helps! But we need to hurry! Times running out!
Posted by robotGEEK at 12:04 PM