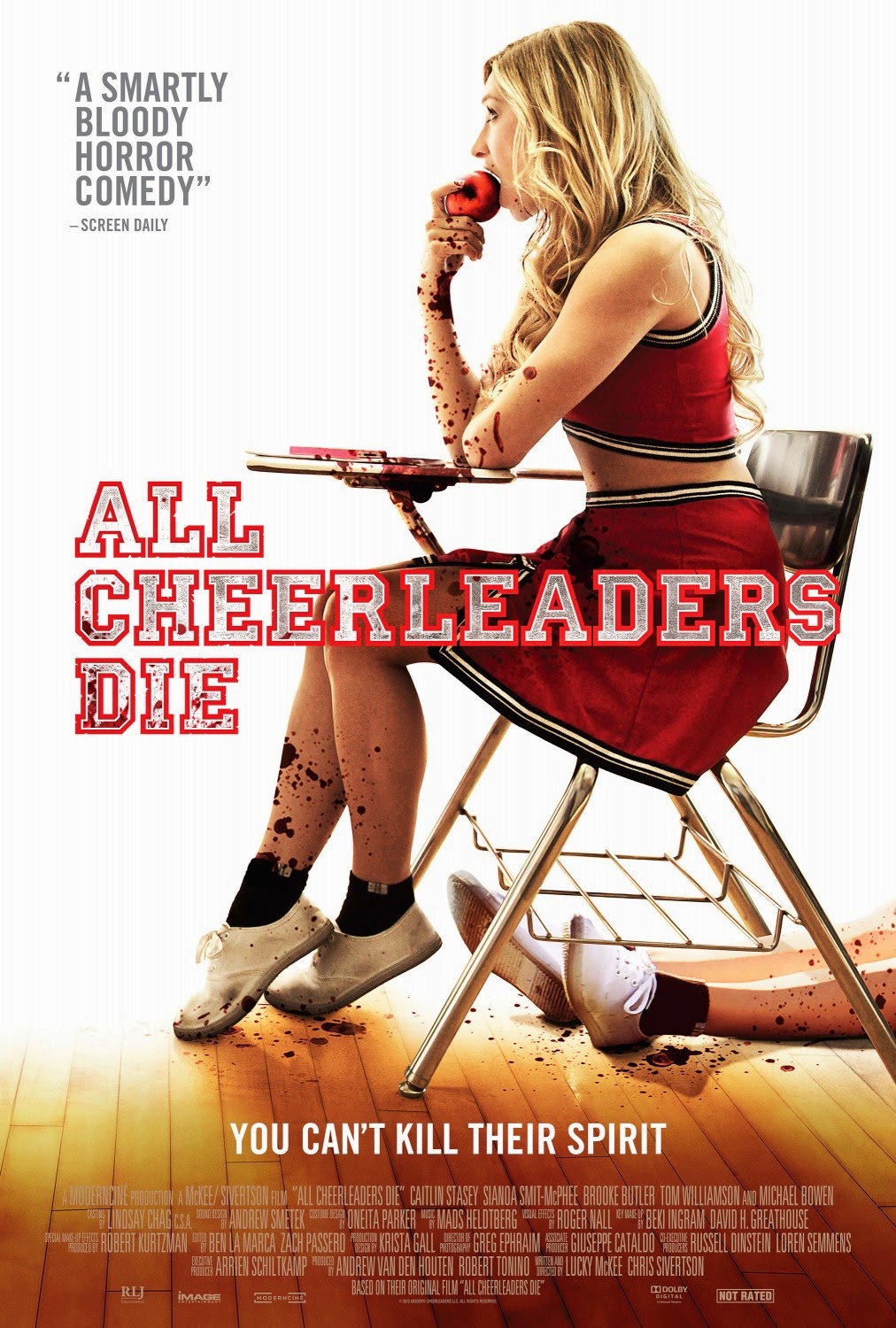 "What a weird fuckin' movie.". Those were my exact words when this was over, because while you may have somewhat of an idea what to expect, I can guarantee you that it won't be at all what you expect, so throw away any pre-conceived notion as to how you think this film will play out, because more than likely, you'll be wrong.

I knew nothing of this film, other than it was co-written and co-directed by Lucky McKee (The Woman, May), who has a steadily growing fanbase in the low-budget horror community. I haven't seen a lot of what he's done, but based on my experience watching The Woman, I wasn't really all that impressed. On the flipside, I have yet to see his most popular film, May. But anyway, going into All Cheerleaders Die, our assessment comes off of the cover art, and absolutely nothing else.

5 minutes into the film and I have to admit, we were a little worried. You see, it begins with the found-footage aspect, which immediately turns me off. An annoying as fuck cheerleader is being filmed by a fellow classmate as she follows her daily school routine, and basically every word that comes out of her mouth is cringe-inducing. And if I remember correctly, I think I said something to the effect "I don't know if I can watch an entire movie of this", But just as I'm ready to give up out of annoyance, the film shifts gears, which it often does, and ultimately plays out as kind of a free-for-all, where pretty much anything and everything happens. For that alone, All Cheerleaders Die was a surprisingly refreshing and thoroughly entertaining little horror gem.

I think one of the things that worried me a bit was that it's classified under comedy "and" horror, and I think my expectations were somewhat skewed. So it was a huge relief to ultimately find out that it's not at all a comedy, rather it's got some light-hearted tongue-in-cheek moments and more than anything, knows not to take itself too seriously. But then out of nowhere, it dives head-on into some dark and serious territory and totally takes you by surprise, and then out of left field, reverses track and sidelines into "WTF?" territory. And that's one of the things I loved about this, that you realistically can't classify this in any one genre. The safe bet would be to just call it a horror film, which it is, but it also goes all over the place that you will be unable to really pin this down.

Maddy decides to infiltrate a group of girls that she despises more than anything, the high school cheerleaders, pretending to become one of them to exact some revenge. Before long, things quickly escalate out of hand and after an accident, nothing will ever be the same for any of them.

The beauty of All Cheerleaders Die is that filmmakers Lucky McKee and Chris Sivertson know all too well that the teen horror genre has been saturated with mundane, tame and lame horror films. You know, the ones that star people that don't actually look like real normal human beings? The genre is overrun by them and McKee and Sivertson know this and basically have made a film by all calculations, looks like one of those films, yet immediately pulls the rug from under you and delivers a film that's so twisted, weird, fucked up and fun as hell that you have to just appreciate the audacity of these guys. It's like their big "Fuck You" to the endlessly lame teen horror films that never seem to cease.

Most of the cast is pretty solid, though I found a few of them quite annoying, which  of course is the whole point. Each one of these characters is almost a caricature of the high school experience; the goth, the jock, the nerd, the cheerleader, the slut, the virgin, the religious pretentious over protective older sister. All the very definition of the archetype of the high school experience, and wonderfully overdone in this film to effective results. You want them to die, you want to see them suffer and McKee and Sivertson, being smart individuals, know this and deliver on that concept.

I have a feeling it's all-over-the-place and kinetic nature may turn some people off, because it's pretty crazy, but what I found it to be overall was entertaining in the most positive way possible. Other than finding some of these characters annoying, I can't think of anything I really didn't like about this, which really surprised me. Go in with an open mind, appreciate the madness and enjoy the ride.